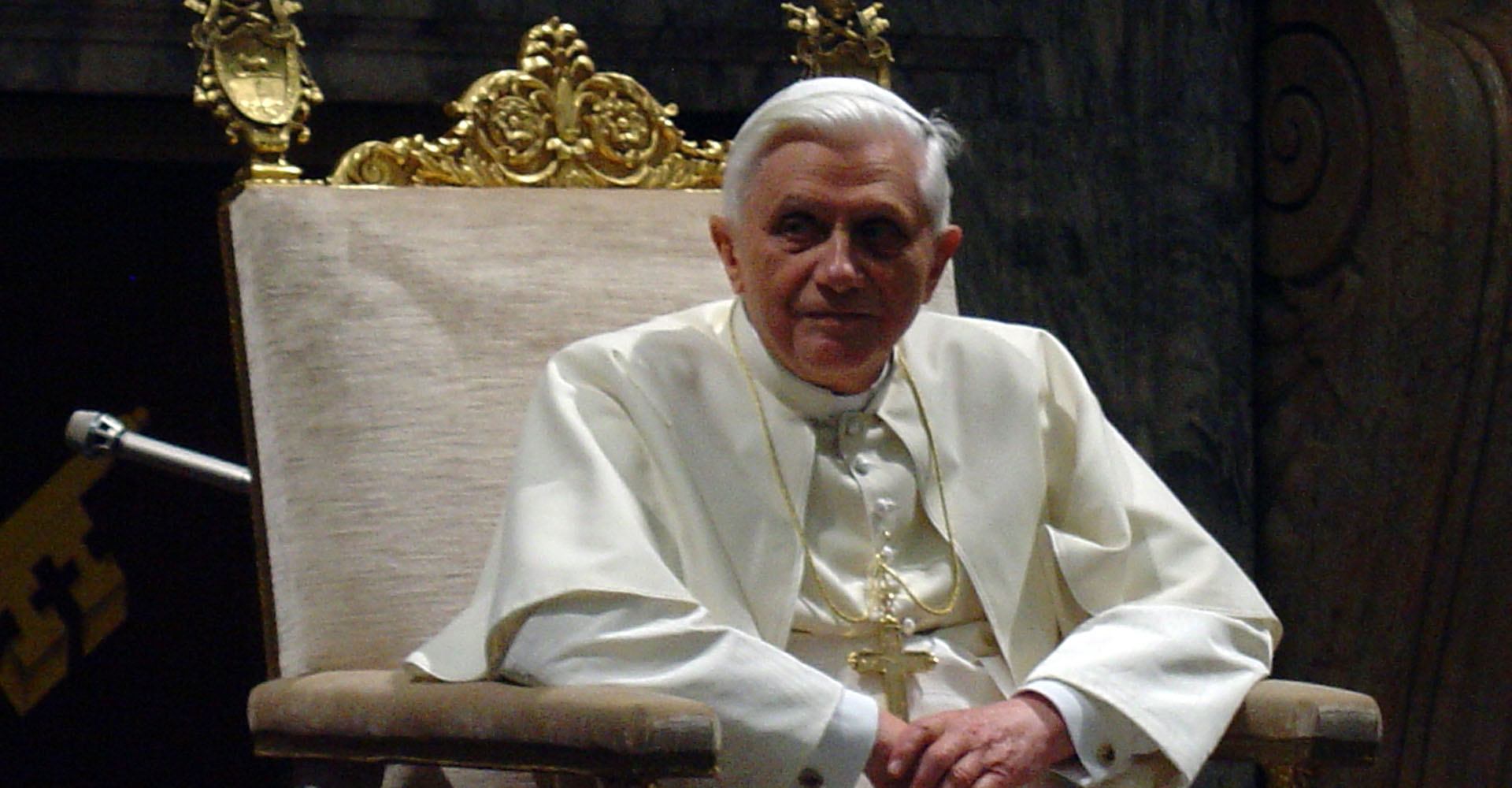 Our Holy Father has made public his Lenten message, which is filled with wonderful insights and important meaning.

One of the observations contained in his message is that “divine justice” differs profoundly “from its human counterpart.” Pope Benedict XVI noted that justice is often defined as every person receiving what is “due” to him. “In reality, however, this classical definition does not specify what ‘due’ is to be rendered to each person,” explained the Pope. “What man needs most cannot be guaranteed to him by law. In order to live life to the full, something more intimate is necessary that can be granted only as a gift: we could say that man lives by that love which only God can communicate since He created the human person in His image and likeness.”

Pope Benedict expresses the age-old truth that man needs more than external, material things. Food and water, shelter and security, as important as these needs are, are not enough. Should we possess the power to rid the world of every injustice, feed all people, ensure comfort and supply every immediate material need, we would still be left wanting. What we need most, in fact desire most, no law or man can give. We thirst for a gift which we can truly live on, a gift which will forever nourish our spiritual needs. But what about the “human counterpart” of justice? Is there a relationship between the Gift we so desire and human justice?

Reflecting on even only a few sentences of the Holy Father’s words often opens the door to a treasure of understanding. The Pope tells us that there are radical differences between divine justice and its human counterpart. We could say that our view of justice is often imperfect and biased, shaped by prejudices and experiences, molded by what is frequently a disordered desire buried within our hearts.

Yes. Our way of thinking differs radically from God’s. Catholics seek to change themselves and the world by thinking more like God, by closing the “gap,” if you will, which is accomplished by prayer and repentance, conversion and love, by conforming one’s self to Christ. It is about going into the world and taking a fresh look, becoming a new person in Christ, and giving God the justice he deserves. What would the world be like if everyone truly understood justice, and, then, lived by it? Yet we cannot live in justice and, at the same time, desert God. The Pope observed that “Just as man needs bread, so does man have even more need of God. St. Augustine notes: if ‘justice is that virtue which gives every one his due … where, then, is the justice of man, when he deserts the true God?’”

Where is the justice of man? Perhaps we can find little justice because we have failed to acknowledge the source of justice. That is, we cannot understand the true meaning of justice if we desert God; for in so doing we are distancing ourselves from Truth. Apart from the Father, there is no truth; there is no lasting happiness, there is no life. As we turn our backs – to one degree or another – on Christ, acting unjustly toward his profound gift of self, errors creep into our beliefs, our words and our actions. We begin to believe we are self-sufficient, we isolate ourselves, we close ourselves off to truth and stubbornly adhere to falseness.

When we reflect on man’s injustice toward God, we find that one resultant symptom is the adamant refusal to assent to the Truth, which tends to create a ripple effect of falseness that spreads throughout society. For instance, a great deal of injustice is caused by those who persist in the notion that they have a “right” to an erroneous or even immoral opinion – a situation which is all too common. We often hear, “I have a right to my opinion!” This statement most often follows a discussion of some element of the Natural Law or morality. Examples include abortion, homosexual behavior, contraceptives, embryonic stem-cell experimentation, the need to properly inform one’s conscience, et cetera. There are, too, the dissidents who constantly labor against the authority of the Magisterium. It is bizarre that people fail to see the inseparable relationship between submitting to Christ and living in obedience to his Church, the Bride to which he gave of himself.

But those who insist that they have a “right” to their opinion fail to understand – or admit – the damage they are doing to both themselves and society. It is one thing to have an opinion as to which is the best flavor of ice cream; however, to stubbornly cling to an opinion that is clearly at odds with truth and logic, to persist in beliefs contrary to the Word of God which is contained in Scripture and unfolded in the living Tradition of the Catholic Church Christ founded is patently insane. We can be certain that incorrect ideologies cause an ever-widening circle of injustice by virtue of the fact that error spreads from person to person. People who insist upon their “right” to believe what they want, such as voting for the pro-aborts or living as if the Christian religion is merely a set of options which may be adopted or discarded at whim, who relativize truth and thus toss it to the wind, are themselves creators of injustice.

The argument can be made that some of the most severe injustice is that caused by relativists. That is, there is a great deal of havoc, pain and suffering in the world that is a product of the notion that truth is relative to the individual. For instance, secularists are often of the mind that absolute truth is nonexistent, and that each individual has the “right” to decide for himself what is moral, how to live, and what to believe. Such egregious errors have led to the horrific deaths of 50 million innocent unborn children in our nation; they were the catalyst behind the Holocaust; and they are intimately connected to Stalin’s murderous Great Purge.

The bottom line is this: “Do we have a ‘right’ to believe incorrectly?” Asked another way, “Where is man’s justice toward God, who is Truth, when he willfully believes a lie?” The mistake is made in thinking there are no consequences for what we say and do, how we believe and act and live. No one has a “right” to believe incorrectly anymore than we have a “right” to believe one plus one equals three. We are supposed to seek the truth and live by it; for God gave us an intellect that we would pursue the Truth, come to know it, and embrace it. On June 29, 1959, Pope John XXIII issued the encyclical Ad Petri Cathedram (On Truth, Unity, and Peace), in which he observed the destruction caused by “ignorance of the truth”:

“All the evils which poison men and nations and trouble so many hearts have a single cause and a single source: ignorance of the truth – and at times even more than ignorance, a contempt for truth and a reckless rejection of it. Thus arise all manner of errors, which enter the recesses of men’s hearts and the bloodstream of human society as would a plague. These errors turn everything upside down: they menace individuals and society itself” (APC 6).

Willful rejection of the truth; that is, adamant insistence on a “right” to throw one’s lot in with what is immoral, what is sinful, what is clearly at odds with the truth is a form of disobedience. St. John tells us: “Whoever believes in the Son has eternal life, but whoever disobeys the Son will not see life, but the wrath of God remains upon him” (Jn 3:36). There is a profound relationship between truth and justice, disobedience and injustice. Further, we cannot see the injustice within ourselves unless we sincerely admit our lack of self-sufficiency, accepting the fact that we are beggars before God, and that we are in dire need of Christ’s gifts of grace.

Here again, we repeat the Pope’s words: “What man needs most cannot be guaranteed to him by law. In order to live life to the full, something more intimate is necessary that can be granted only as a gift: we could say that man lives by that love which only God can communicate since he created the human person in his image and likeness.”

We can receive a gift by reaching out our hand, but there is more to receiving it fruitfully. If we truly appreciate a gift, we accept it with love, we make use of it, we cherish it and we gratefully thank the giver. A gift that means a great deal to us is never forgotten. We think of it the moment we wake, it is our last thought when night falls, it is on our mind as we pass into sleep. The answer to the injustice and pain in the world is found in accepting Christ’s gift in justice; that is, by truly receiving Jesus’ gift and giving back to him what justice demands: our entire self. In order to do that, we have to be willing to let go of stubborn ideas, live in a new way, think in a new way. We have to die to ourselves.

“Christ does not force our will, he takes only what we give him. But he does not give himself entirely until he sees we give ourselves entirely to him” – St. Teresa of Avila

“Thanks to Christ’s action, we may enter into the ‘greatest’ justice, which is that of love, the justice that recognizes itself in every case more a debtor than a creditor, because it has received more than could ever have been expected. Strengthened by this very experience, the Christian is moved to contribute to creating just societies, where all receive what is necessary to live according to the dignity proper to the human person and where justice is enlivened by love” – Pope Benedict XVI