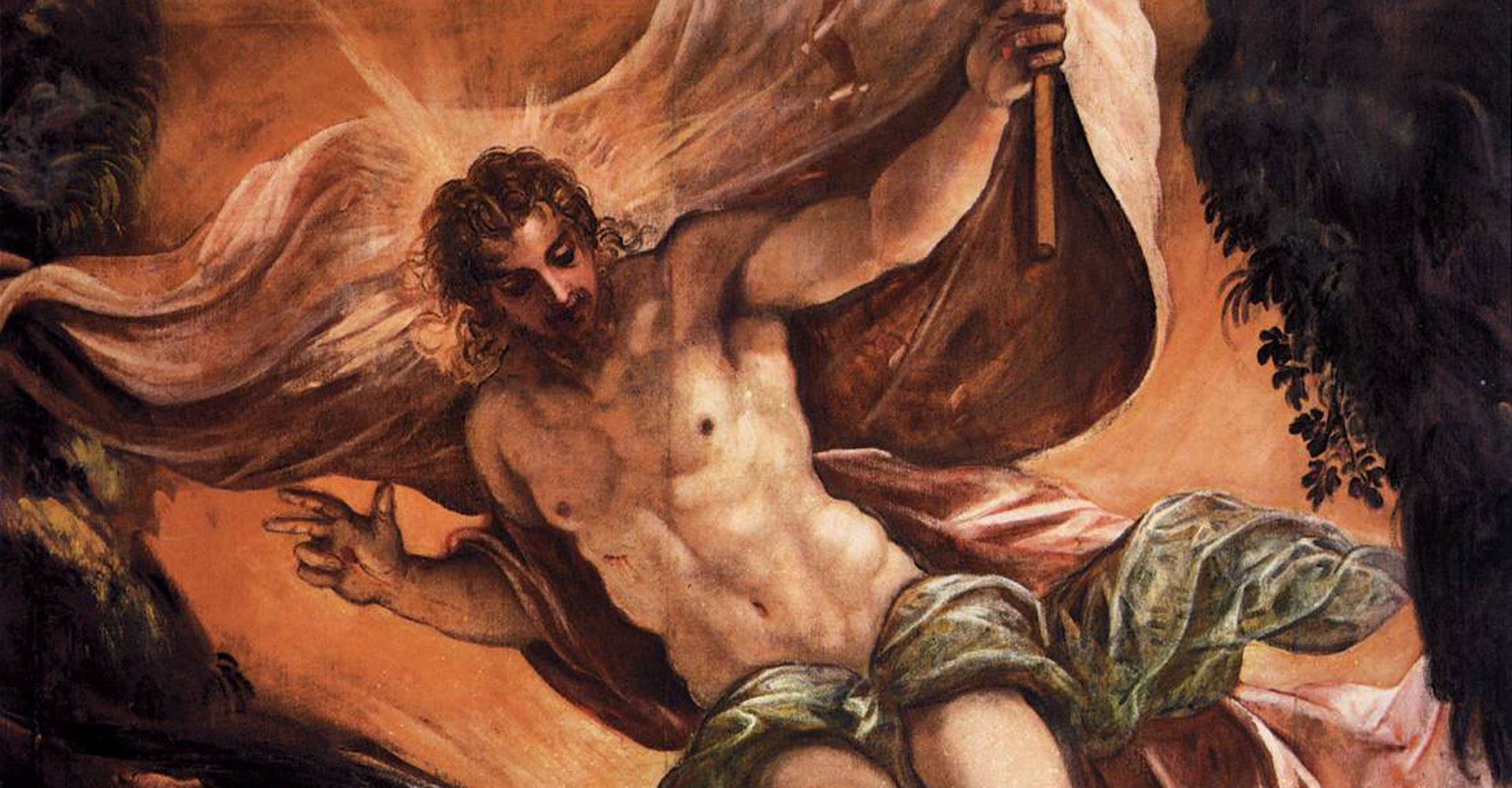 Advent is a sacred season of preparation in which we are urged to open our hearts in totality to the ineffable joy and love of the Light of all lights, giving ourselves over in trusting abandonment to the Child-King, in order that the Risen Lord may enter fully into eternal communion with us as adopted sons and daughters of God.

We are called, drawn by the salvific will of the Father, to both realize and actualize our membership in the divine family through a life of true Christian discipleship; we are invited to give our fiat now and into eternity with the same sincerity, intensity and fidelity as did the sweet and holy Virgin Mary; we are moved to say, aided by the sublime and regenerative grace of the Holy Spirit, along with St. Andrew, “We have found the Messiah” (Jn 1:41).

Ultimately, Advent finds its completion in our union with God, as we are swept up into the supernatural life of the Holy Trinity. Yet such an incomparable event is not something which merely dwells in a yet-to-be-realized future; nor is it something accessed only after we pass through the thin veil of death which soon awaits us all. As members of holy mother Catholic Church, our thirst for communion with the Triune God is satisfied by the Risen Lord himself, who both announces the great eucharistic feast at his altar as well as provides for it, in order to enable us to consume his own flesh and blood—the food of eternal life.

So critical is the reception of the body, blood, soul and divinity of the Risen Lord in the Eucharist that Christ said, “Truly, truly, I say to you, unless you eat the flesh of the Son of man and drink his blood, you have no life in you” (Jn 6:53).

Preparation, of course, presupposes repentance and conversion. In preparing to receive the Risen Lord in the Eucharist, we would do well to meditate upon St. Paul’s warning that whoever eats unworthily, eats and drinks judgement on himself, because he fails to distinguish the body of the Lord (see 1 Cor 11:27 ff.). Therefore, for Catholics the sacrament of Penance and Reconciliation is an intrinsic element of that total conversion of heart (metanoia) in which we cry out in union with the Prodigal Son: “Father, I have sinned against heaven and before you; I am no longer worthy to be called your son; treat me as one of your hired servants” (Lk 15:18-20).

In his book, God Is Near Us, then Cardinal Ratzinger observed that Jesus’ Last Supper “was not one of those meals he held with publicans and sinners,” it was made “subject to the basic form of the Passover, which implies that this meal was held in a family setting. Thus he kept it with his new family, with the Twelve; with those whose feet he washed, whom he had prepared, by his Word and by this cleansing of absolution (see Jn 13:10), to receive a blood relationship with him, to become one body with him” (60).

The Eucharist is “the sacrament of the reconciled,” continued Cardinal Ratzinger, “to which the Lord invites all those who have become one with him; who certainly still remain weak sinners, but yet have given their hand to him and have become part of his family. That is why, from the beginning, the Eucharist has been preceded by a discernment. . . . The Eucharist is the sacrament of those who have let themselves be reconciled by God, who have thus become members of his family and put themselves into his hands. That is why there are conditions for participating in it; it presupposes that we have voluntarily entered into the mystery of Jesus Christ” (ibid.).

It is through the sacrament of Penance that we are reconciled with God and Church: our feet are washed by the healing and regenerative forgiveness of Christ through the Holy Spirit; we are embraced and kissed by the ever-compassionate, tender and loving Father; the familial ring is again placed on our finger, the fatted calf is killed and the celebration is begun (cf. Lk 15:20 ff.).

Eucharist: Life-Blood Dynamic of The Christian

As people of the Church, nourished in the womb of Christ’s immaculate Bride, we reside in the holy dwelling place of the minister of salvation, a loving embrace of truth and unity in which the Holy Spirit both reveals the Son to us and guides us along our destined path. Here, in the arms of the city of truth who is the Church, the Redeemer of humankind gives to men his sacred flesh as spiritual food. Advent calls us to receive as gift the Gift given as Gift.

In the words of Blessed John Paul II, the Eucharistic “sacrifice is so decisive for the salvation of the human race that Jesus Christ offered it and returned to the Father only after he had left us a means of sharing in it as if we had been present there. Each member of the faithful can thus take part in it and inexhaustibly gain its fruits. This is the faith from which generations of Christians down the ages have lived” (Ecclesia De Eucharistia 11).

Since Eucharist is the gift of Christ’s saving work, we can say that this gift of himself is the gift of life for which all of mankind should eagerly thirst. Eucharist is the “ever-living and life-giving power” (CCC 1116) which flows forth from the Body of Christ, nourishing with life those whose love of the Savior has drawn them to the bountiful table of the sacred altar.

In consuming the Eucharist, we receive the Risen Lord, the light and the life of men (Jn 1:4); thus it is truly the life-blood dynamic of the Christian. The Eucharist is therefore spiritual nourishment par excellence, for it is truly the Real Presence of Christ, and thus the highest and most sublime Gift ever possible.

Through the gift of Eucharist, our eyes of faith are sharpened as we enter into communion with Christ and share in his own life. Blessed John Paul II noted that “whenever the Church celebrates the Eucharist, the faithful can in some way relive the experience of the two disciples on the road to Emmaus: ‘their eyes were opened and they recognized him’” (Lk 24:31; Ecclesia De Eucharistia 6).

The Council Fathers informed the faithful that our Savior instituted the Eucharistic sacrifice at the Last Supper “in order to perpetuate the sacrifice of the cross throughout the ages,” entrusting to the Church “a memorial of his death and resurrection: a sacrament of love, a sign of unity, a bond of charity, a Paschal banquet in which Christ is eaten, the mind is filled with grace, and a pledge of future glory is given to us” (Sacrosanctum Concilium 47).

Our Holy Father Pope Benedict XVI notes that the “first element of eucharistic faith is the mystery of God himself, trinitarian love.” For “God so loved the world that he gave his only Son, . . .” (Jn 3:16). “In the Eucharist Jesus does not give us a ‘thing,’ but himself; he offers his own body and pours out his own blood. He thus gives us the totality of his life and reveals the ultimate origin of this love” (Sacramentum Caritatis 7).

The “night is far gone, the day is at hand” (Rom. 13:12). This Advent, prepare to receive the Eucharist: the Gift above all gifts; the gift of incomparable Love: a love so great it cost our Savior’s death in order to provide it. Let us first, though, be purified and reconciled through the sacrament of Penance, a direct encounter with the healing and regenerative grace of God, that we may then fruitfully rise, consume the Risen Lord at the Paschal Banquet, and thus be swept up into the divine life of the Holy Trinity. Then we may truly say: a new day has dawned. The “kingdom of heaven is at hand” (Mt. 3:2).