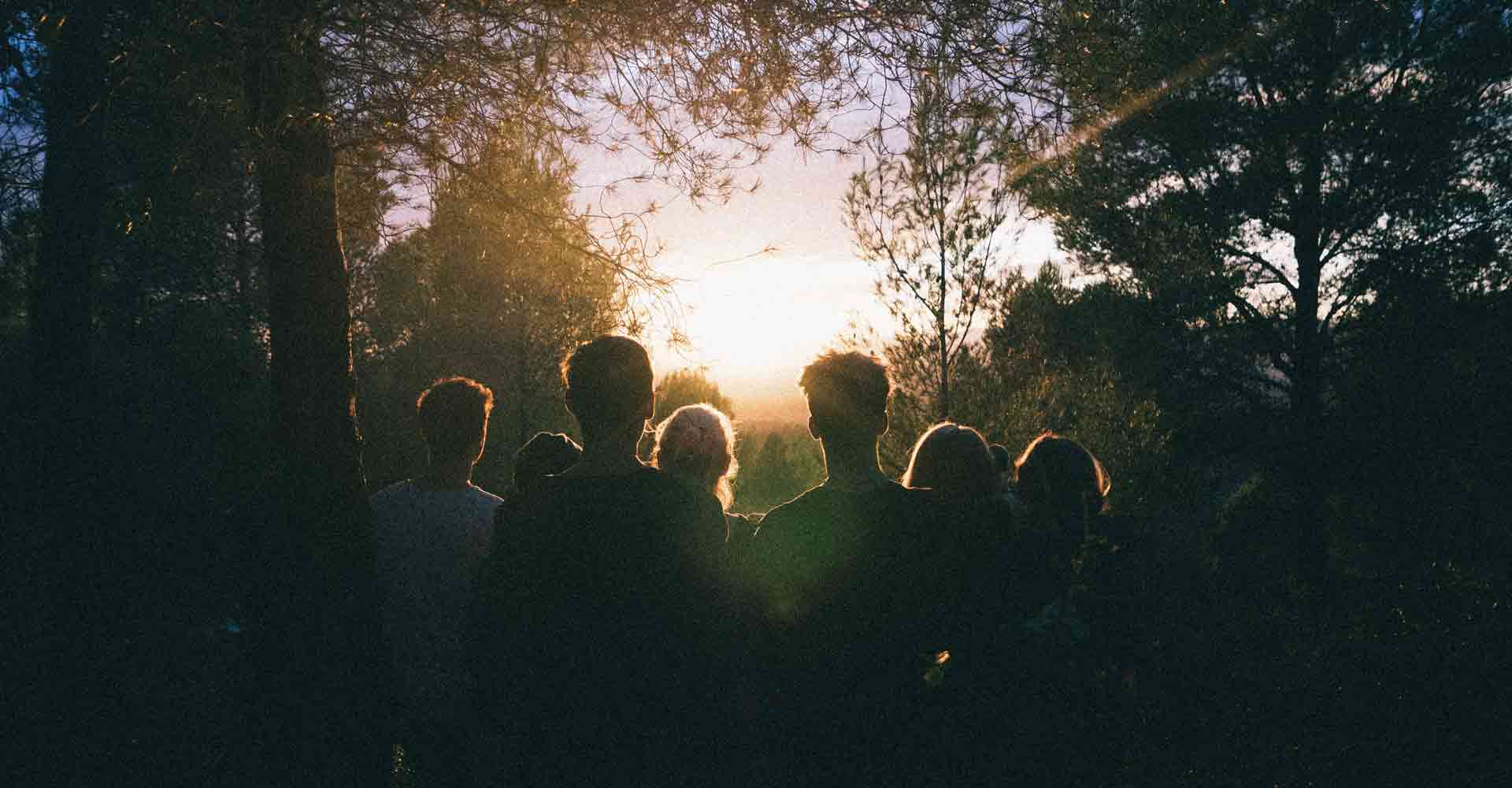 Photo by Daan Stevens on Unsplash

Children, as the crowning glory of marriage, stand as an eternal testament to the love of their parents.

The American cultural lens of late has warped the way in which children are viewed to the point that they are seen not as gifts but as burdens. Many people no longer recognize children for who they are: precious jewels of indescribable beauty and worth whose growth, formation and education in the Christian life are entrusted to their parents. As the “crowning glory” of marriage (CCC 1652), children are a permanent testament to the love of their father and mother, whose lives will echo this love throughout eternity.

The American picture of the ideal family has, for some time now, been reduced to bleakness. It typically consists of mom, dad, and two children, if not a single child or even none at all. The norm for television, billboard and magazine advertisements is the cute but minimalist familial cell smiling its way to extinction. Nearly gone are the days of mom with four to six children in trail at the grocery store, or dad with his troop of sons and daughters loading up on fishing tackle in the sporting goods department for their weekend camping trip.

People today don’t have time for children, or they think children will cramp their style, or they are convinced that children somehow oppose happiness, as if children equate to nothing but untold, hair-pulling stress and perpetual, grinding poverty.

What has happened? It is not a new question. Why is it that some parents today view children as a burden? Why is it that many moms and dads, after having had a child or two, throw in the towel? Why is it that others refuse to begin at all? There are lots of ideas and lots of discussions. Some say this startling dilemma is a complex one. Yes, it is. But it’s also simple. I propose that the primary reason why parents are having fewer children is due to a fissure that has developed in their understanding of what it means to be human. If we fail to understand our purpose and goal, we can hardly be expected to connect the dots with regard to the indescribable worth of marriage, procreation and children, family and parenting.

There are also other factors involved. One of these is the way in which parenting is perceived. Kay Hymowitz makes some excellent points in her article, “Why Are American Parents So Unhappy? A Theory.” She notes that there “are lots of theories about the source of parental pain, but here’s one you probably haven’t heard: it’s the way Americans raise their kids.”

Kay Hymowitz makes her case well. She points out that the culture of American parenting is a significant part of the problem. Unconsciously affected by the surrounding culture, American parents are “promoting a particularly American form of individualism: expressive, assertive, and full of self-esteem.” Said another way, they are raising children to be robustly uncooperative, individualistic, self-willed little tigers. It is not so much that children today are raised to think they are special; they are raised to think they are more special than anyone else. It’s not a good prospect.

Kay Hymowitz also observed that American parents organize their lives around their children rather than vice-versa. Try doing that with three or four children. It doesn’t work out too well. Five or six is out of the question.

In any case, as I mentioned above, there is the issue of not merely a lack of clarity with respect to what it means to be human but a fractured view of the reality of the human person. For instance, if I fail to understand my origin, purpose and goal, I can hardly be expected to understand how I should live, what I should pursue, how I should spend my time. I cannot truly understand what it means to live if I fail to grasp why I have been given the gift of life in the first place. If I cannot see the path, why walk in any particular direction? The truth about who I am is crucial to proper living.

One might use education as an example. If my education consists of nothing but rote learned formulas and equations needed in order to carve out a financial chunk in the world, while the greater and even eternal concepts of beauty, goodness and truth are set aside or ignored, I will be left with a gravely insufficient education. I will become highly pragmatic and largely incapable of abstract thought, which is to say my growth as a human person will be stunted. If I do not understand what is truly good or recognize its source (God), how can I prioritize, focus properly, and live my life according to a correctly ordered view of reality? Thus limited, the meaning of life and what it means to love becomes a swirl of confusion.

On the other hand, the more my life is flooded with the light of reality, which is the light of God, the more will I live a full, joyous human life, achieving the full potential for which I was created.

What about marriage and children? If I fail to understand what it means to live a fully human life, I will most certainly misunderstand the purpose and goal of marriage as well. Children, too, will be viewed through a warped lens. Consequently, the immeasurable worth of parenting will be reduced to little more than surviving the day, putting the kids to bed, and dreaming of the so-called golden years of a child-free existence in the distant future.

One of the concepts the American cultural lens has muddled of late is the indescribable beauty and worth of the gift of parenting and procreation. Children are a living and eternal testament to the love of their married father and mother, whose conjugal act becomes a participation in God’s creative act of love, which brings about new human life—creates a unique human person who is destined to live forever in eternal communion with God. There are no words for the priceless gift of children, which the Catechism of the Catholic Church, quoting from Gaudium et Spes, calls the “crowning glory” of marriage:

By its very nature the institution of marriage and married love is ordered to the procreation and education of the offspring and it is in them that it finds its crowning glory.

Children are the supreme gift of marriage and contribute greatly to the good of the parents themselves. God himself said: “It is not good that man should be alone,” and “from the beginning [he] made them male and female”; wishing to associate them in a special way in his own creative work, God blessed man and woman with the words: “Be fruitful and multiply.” Hence, true married love and the whole structure of family life which results from it, without diminishment of the other ends of marriage, are directed to disposing the spouses to cooperate valiantly with the love of the Creator and Savior, who through them will increase and enrich his family from day to day” (CCC 1652).

That the Holy Trinity invites parents to participate in God’s love and in so doing populate the kingdom of heaven through the generation and education of children is truly an astonishing gift. Each child conceived remains an immortal and glorious monument to the fidelity, selflessness and life-giving love of the parents, a love that draws its source and energy from the Triune God. Children are, then, the fruits of marriage and living signs of God’s superabundant, creative and gracious love.

Parents who begin to see the reality of marriage and willingly participate in God’s plan for it, discover a profound joy in giving birth to and raising children, even amidst hardships and suffering. Parenting becomes, then, not a burden but an immeasurable gift. Although there will inevitably be times of sadness, difficulty and trail in this fallen world, the warmth of familial love will prevail and outweigh any suffering. As parents gaze into the depths of their children and discover their uniqueness as human persons created in God’s image and likeness, whose destiny is the Father’s embrace as sons and daughters of God, they recognize their participation in the plan of God is worth every once of struggle, however small it may be when compared to the grand scheme of eternal life.

Yes, to parent in today’s world requires courage. It also requires careful consideration of how to raise children, cultural influences, how and when to discipline, what to teach them, and so forth. Each Christian family is to live as a family of God, a cell of the greater family of God we call the Church. It’s a beautiful life, filled with responsibility and reward, challenges and unforgettable moments, some difficult but many fulfilling and joyous. In any case, parents are never alone, for when they join their marital life to God and give of themselves openly to his plan, Christ is with them, strengthening them, supporting them.

May the Virgin Mary, the Mother of God whose “yes” brought the Savior of humankind into the world, intercede this day for parents and all those who long to raise up children and populate the kingdom of heaven. May their lives, through her unceasing support and prayer, be brought to human fulfillment in and through and with her Son, Jesus Christ.

Please consider helping to maintain this ad-free site with a donation.