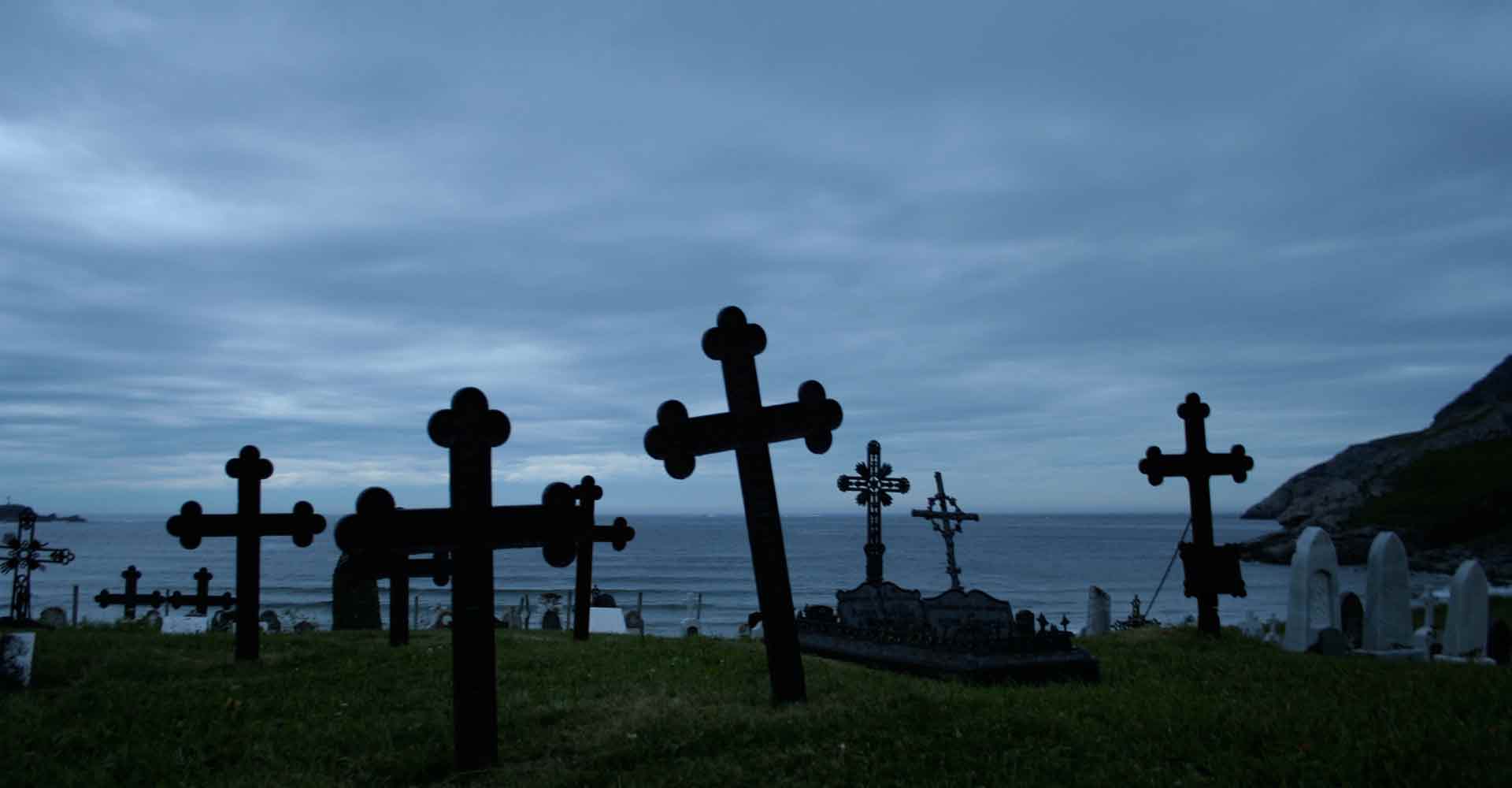 Although it’s often an unspoken subject, even viewed as a forbiddent thought, reflecting on one’s death is a spiritually healthy thing to do.

Death often remains the unspoken, unthinkable subject. While we tend to refrain from discussing or thinking about frightening, unpleasant topics, such a habit is indeed an unfortunate one. I propose that thinking about death is one of the more intellectually and spiritually healthy things a person can do. It’s the sane thing to do, and it’s the human thing to do. As we mediate on the reality of death, and learn what God has revealed about death, life and the human person to his Church, we learn a great deal about what it really means to live.

I’m not a psychologist, but as a Catholic deacon and theologian I’m a student of human nature. Many people are surprised to learn that theology is not only the science of the study of God (a simple definition is to say theology is to “talk about God”), but also the study of human nature. The theologian is often concerned with the effects of grace, sin, the sacraments and so forth on human nature. Theologians are interested in “what” and “who” man is in relation to God, which includes the origin, purpose and goal of humankind. For instance, we ask questions such as, what does it mean to be human? What are the effects of original sin on human nature? What happens to us in an encounter with God? How are we changed and how does God desire to change us? What does it mean to meet God?

When we think of meeting God, we often think of death. What is it like to die? Death seems the definitive encounter, that irreversible moment when every protective emotional or physical wrapper we’ve spun around ourselves is stripped away. It wipes clean every pretense as we are exposed, naked in a sense, before the unspeakable power of almighty God. At death, pride must give way to humility, for we can no longer pretend to be in control of anything—we are powerless as our physical life ebbs away.

I recently watched a documentary on near-death experiences. Dozens of Americans interviewed were asked if they believed in an afterlife. People either said they did or they didn’t. After all, it’s a “yes” or “no” question. Then they were asked about what they thought the next life might be like. Predictably, the opinions of what the afterlife entails and of what the experience of death is like or about differed radically. It seems the assumption is that anyone can believe whatever about death, and they often do. Given the rise of religious and moral indifference in America, the countless opinions in this area expressed by the interviewees is unsurprising.

People rarely take death seriously, until it knocks on their door, that is. One of the reasons there is such a great diversity of opinion about the afterlife is that people fail to reflect deeply on death. To think about death is often highly uncomfortable for the unprepared. It’s the unspoken and unthinkable subject, carelessly dismissed, either that or subjectively shaped to be what one would like it to be, which is the same thing as dismissing it. On the other hand, for those who long for God and thirst for his divine love, thoughts of death can be comforting and uplifting, even bringing joy in expectation of meeting Christ, whose infinite love is beyond all other love.

Back to Kübler-Ross’s five stages of grief. The first is denial. People who hear the words “you’re dying,” often deny that death is a near future certainty. It’s not that they can’t believe it can happen to them; it’s that they can’t believe it is happening to them right now. But denial of death is not something that takes place only after hearing that frightening diagnosis. And that’s my point. Some people are in denial throughout much of their lives.

While we tend to refrain from discussing or thinking about frightening, unpleasant subjects, such a habit is indeed an unfortunate one. It is nonsense. I propose that thinking about death is one of the more intellectually and spiritually healthy things a person can do. It’s the sane thing to do, and it’s the human thing to do. Further, we must not simply think about death, but we must pray about it. Next, we must study what God himself has revealed to humankind about passing through the veil of physical existence here, on earth, to the next life.

It is also insane to stubbornly and unreflectively think death and the afterlife is whatever we want it to be, as if we can shop for our version of God and heaven as we might pluck a favorite movie off the bulging home-entertainment racks of the world’s largest video store. Our imaginative flights about the invisible world do not create the reality of death nor the next life. However, we do have a say in our final destiny.

God has created humankind in his image and likeness. In his superabundant and glorious wisdom, he has chosen to create us as free persons. We have been gifted with free will, the freedom to choose this or that, good or evil, which is the highest form of movement among creatures. Given the formidable power of freedom, we have the power to shape our character and destiny. It is important that we shape our character in a positive, virtuous way, that we live lives of holiness. That we were created to love God really says it all. We were made to become saints.

So, what is death, that “final frontier,” all about? That is determined by the state in which you die. If you die loving God greatly, perfectly, then the next life will be a magnificent reality of joy and happiness beyond anything you could possibly imagine as you enjoy the Beatific Vision, the face-to-face vision of God. If you die loving God imperfectly, with some attachment to venial sin, then you will enter the state of merciful and temporary purification the Church terms as Purgatory. After you are cleansed and prepared, you will enter heaven. If you die rejecting God, you will suffer eternal separation from him, who is the source of all that is good.

Clearly, the way in which we live our life is of grave importance, for there can be eternal consequences for our actions, which is both the beautiful and terrifying reality of freedom. The way in which we shape our character through the choices of free will shapes our destiny. The goal, of course, is eternal communion with God. There are no tricks involved, no magic, no secret formulas or knowledge is required. God simply asks us to love him and embrace the salvation offered by his Son, Jesus Christ. He asks us to live the gospel life—all of it. It’s the life of love of God and love of neighbor. It’s the life of public worship in the heart of the Church. It’s the life of sanctity and holiness. It’s beauty, goodness, and truth.

Death and the next life. How does the reality of death move me to live? How should it change me? And what is it like to gaze upon God? What does it feel like to be overwhelmed with supernaturally infused bliss?

“What no eye has seen, nor ear heard, nor the heart of man conceived, what God has prepared for those who love him” (1 Cor 2:9).

However, we do not love God merely for what he can do for us. We love God because of who he is, because of what he has done for us. He has given us the gift of life. The Son of God made man has died for us that we may become like him, share in his own divine life, and live forever in eternal communion with God.

I urge you to purchase a copy of the Catechism of the Catholic Church and, along with the Bible, read about what God himself has revealed to his Church on the subject of death and the next life. Why? Because it’s in your future. Because death is all about living. Because the only way to live a fully human life is to prepare for death.

“Here indeed we groan, and long to put on our heavenly dwelling, so that by putting it on we may not be found naked. For while we are still in this tent, we sigh with anxiety; not that we would be unclothed, but that we would be further clothed, so that what is mortal may be swallowed up by life” (2 Cor 5:2-4).

Back to the five stages of grief. You might be surprised to hear that those who love God perfectly, whose lives are devoted to the blessed Trinity, bypass those stages as they are raised above them. In a manner of speaking, they thirst for death because they thirst to cross the threshold of the heavenly dwelling place and enter the house of God. The profound touch of the divine Other, whose sublime and indescribable love has left them forever craving him, has called them to a new way of living and clothed them in the Spirit. Their eyes remain fixed on the Beloved; their hearts beat for him and him alone; their voices are filled with delight in speaking of him. For these people, saints as they are, the five grief phases of denial, anger, bargaining, depression and acceptance are foreign to the experience of death’s approach.

One does not deny what is desired; one is not angered by what is hoped for; one does not attempt to bargain away a precious treasure; one does not suffer depression over what brings joy; and one does not accept entry into the next life with resignation, but rather embraces it with delight.