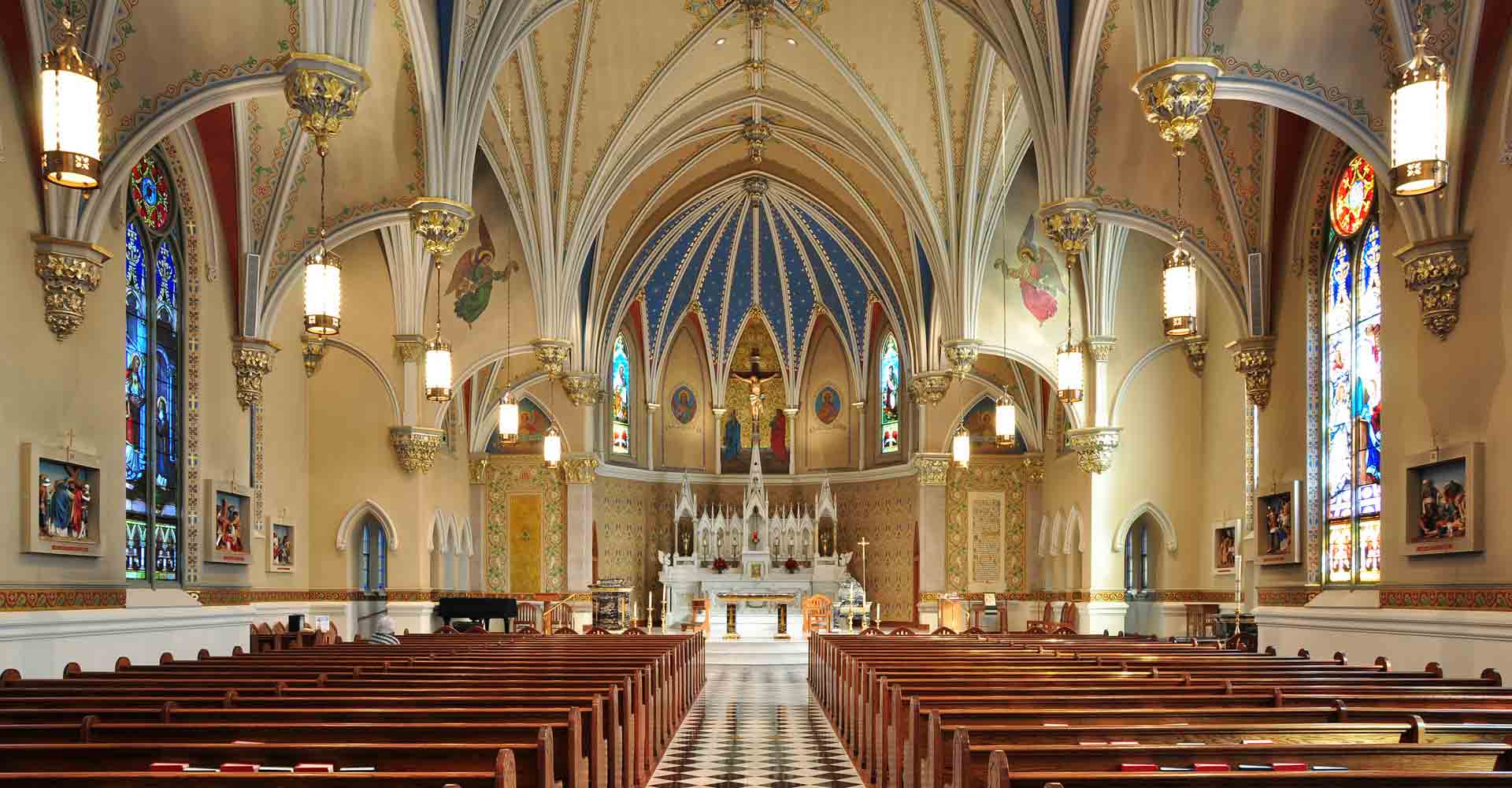 Dear Readers: I’m excited to introduce William Hemsworth as a new contributing writer for Joy In Truth. Please check out his bio on our contributing writers’ page to learn more about him. I look forward to seeing more of his work. May God bless his efforts at evangelization in participation in the missionary work of the Church—Deacon Frederick Bartels.

The study of ecclesiology leads to an understanding of the Church as an organic, visible and invisible, earthly and heavenly reality governed by a structured and hierarchical leadership, bearing the four marks of authenticity flowing from her divine foundation.

The Church proclaims the Gospel of Christ, and spreads his message across the world to all peoples. The Church is tasked to be a beacon of hope, and all who enter through her doors are taught the ways of salvation. Just how the Church does this is the subject of debate. The Church finds its foundation from Christ in Matthew 16:18 when our savior says, “And I say unto thee: That thou art Peter; and upon this rock I will build my church, and the gates of hell shall not prevail against it” (Douay-Rheims). Saint Paul calls the Church the bulwark and pillar of truth in 1 Timothy 3:15. The Church is categorized by the four marks of being One, Holy, Catholic, and Apostolic. These four marks, along with why the Church is more Marian than Petrine in her nature will be elaborated on in this article.

THE CHURCH IS ONE

The first mark of the Church is that it is one. One is more than a number, but conveys unity. This unity comes from her source which is the eternal Godhead itself. This is seen clearly in the Catechism of the Catholic Church which states, “the highest exemplar and source of this mystery is the unity, in the Trinity of Persons, of one God, the Father and the Son in the Holy Spirit” (Catechism 233). This does not mean that disagreements do not exist, but it does mean that doctrinally we have a united front.

Within the Church there are many gifts and charisms that people have. That is the beauty of unity.  One person may be good at administration, another in teaching, and yet another may be able to speak in tongues. In this way the Church has a valuable lesson for society. Every gift that a person possesses is useful in the building up of the Church. This is another way that the Church is one. The individuals in the Church come together to build each other up and proclaim the faith that was proclaimed by the apostles. The Vatican II document titled Lumen Gentium states in paragraph four, “He leads the church in all truth, and he makes it one fellowship and ministry, instructing and directing it through a diversity of gifts both hierarchical and charismatic, and He adorns it with His fruits” (Norman Tanner 108).

THE CHURCH IS HOLY

The second mark of the Church is that it is holy. The Church is holy based on Jesus Christ who is its founder. This can be seen in the salutation of Saint Paul to the Corinthians where he writes, “to those who are sanctified in Christ Jesus, called to be saints” (1 Corinthians, 1:2, RSV). The Church is sanctified, or made holy, by its call and mission. The Church is made up of sinners, who by the grace of God, carry out the great commission of teaching and baptizing.

The Church is the bride of Christ, and just as a husband and wife are one flesh, so is the Church holy because of the bridegroom. This is seen in paragraph 824 of the Catechism which states, “United with Christ, the Church is sanctified by him; through him and with him she becomes sanctifying” (Catechism 237). The Church acknowledges that the people within are not perfect, but need God’s saving grace. Like a loving mother, the Church holds those souls closely and provides them the means of which to be saved. The Church, through its liturgy and sacraments, provides the means of grace which Christ instituted fully and perfectly.

THE CHURCH IS CATHOLIC

The third mark of the Church is that it is catholic, but this means so much more than the name of the Roman Catholic Church. The word first came into use by St. Ignatius of Antioch in the second century. Saint Ignatius writes in his epistle to the Smyrneans, “Wherever the bishop shall appear, there let the multitude [of the people] also be; even as, wherever Jesus Christ is, there is the Catholic Church” (Alexander Roberts 701).

In using this word, St. Ignatius tells his readers that the Church is universal. It is a Church not just for the Jews or gentiles, but for all people. It is for the rich, the poor, slave, or free because we are all children of God, and Christ’s message is to be taught to everyone. The Church is also Catholic because the full deposit of faith, which consists of sacred scripture and sacred tradition, have been given to her. Through these deposits, she can fulfill the final command of Christ laid out in Matthew 28:19-20.

How does this relate to other ecclesial communities? The Church is also Catholic because of its structure of bishops, priests, and deacons. Of course, the pope, the bishop of Rome, has authority.  This is a big hurdle for some Protestants. However, this does not mean that they are not Christians and are not part of the universal Church. They are just not in full communion with the Church that was established by Christ.

THE CHURCH IS APOSTOLIC

The Church is apostolic because the apostles were given the authority from Christ to establish it.  The Catechism in Paragraph 857 states, “the Church was built on the foundation of the Apostles, with the help of the Holy Spirit, the Church keeps and hands on the teaching, she continues to be taught, sanctified, and guided by Christ through their successors” (Catechism 247). As previously stated, the Catholic Church is made up of bishops along with the Pope. This group of men has the great honor of carrying on the teaching of the apostles. This is known as the teaching office of the Magisterium. Contrary to what some think, scripture is not self-interpreting and interpretation can change based on one’s presupposition. The Church is apostolic because the teaching office of the Church, the Magisterium, was given the divine task to interpret scripture (Hitchcock 79).

The apostolicity of the Church is seen clearly in sacred scripture. Acts 1:24-25 which states, “And they prayed and said, ‘Lord, you know the hearts of all men, show which one of these two you have chosen to take the place in this ministry and apostleship from which Judas turned aside, to go to his own place’” (New American Bible). Since the apostles replaced Judas it is only natural that this was meant to continue. History shows that the apostles appointed men who would take over their ministry (LG 20).

In the four marks, we see the Church’s mission, structure, and its establishment in scripture and tradition. In addition to the four marks, the Church also has Marian and Petrine charisms. In the Petrine charism, we see the Church linked with the apostles. As an example, Pope Francis is Saint Peter’s successor, and thus the Church today has the historical link to the apostles. Each bishop can trace their ecclesial heritage to one of the twelve apostles, and history shows that there was an early understanding of papal primacy. This fact is often disputed with our Protestant brethren.

The Marian charism is no doubt a very significant area of disagreement with other Christian churches. As Mary was a mother to Christ, the Church is a mother to the faithful. Regarding Mary and the Church, the Catechism states, “The faithful still strive to conquer sin and increase in holiness. And so, they turn their eyes to Mary: In her the Church is already all-holy” (Catechism 829). There are many sources in sacred scripture that allude to the Marian influence.  One such passage is John 19:26-27 “When Jesus saw his mother and the disciple whom he loved standing beside her, he said to his mother, ‘Woman, here is your son.’ Then he said to the disciple, ‘Here is your mother.’ And from that hour the disciple took her into his own home” (NRSV). Our Lord was giving his mother to John, and in the same way he gave us Mary to be our spiritual mother. By teaching and administering the sacraments the Church acts in this motherly role for her children. Though the Marian and Petrine charism have their place, the Marian has a larger significance.

In Ecclesiology, we study the Church and its doctrines. The four marks of the Church make up the theological foundation that differentiate it from other religions. In John 17 Christ prayed for unity, and in Christianity this is hardly the case. We have the promise of Christ that the powers of evil will not overcome what he has established. We should take great joy and courage that we participate with the Church in its mission to the world. The Catholic Church can trace its lineage and doctrine to the very foundations of Christendom. As a result, the Church is not only the body of believers as Protestants believe, but is a visible entity in which the faithful can go for comfort and guidance.

Hitchcock, James. History of the Catholic Church: From the Apostolic Age to the Third Millennium. San Francisco: Ignatius Press, 2012. Print.

William is a convert to the Catholic faith and was ordained as a Baptist and a Lutheran.  He holds a Master of Divinity from Liberty University and is pursuing a Masters in Sacred Theology from Saint Joseph’s College of Maine.  He lives in Tucson, AZ with his wife and four children.  William is active in the Church and teaches 1st grade CCD as well as his parish’s RCIA program.