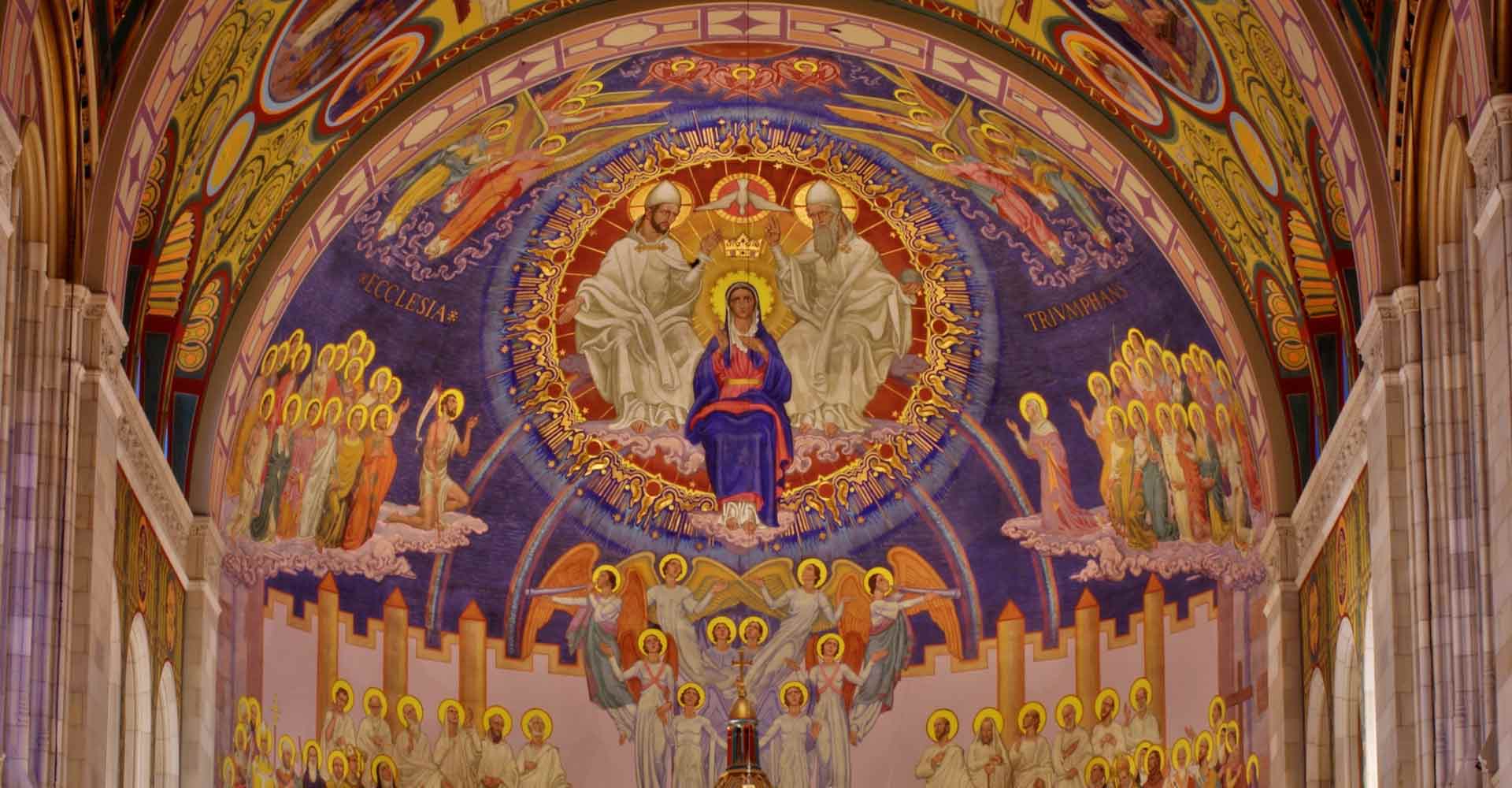 By Nheyob (Own work) [CC BY-SA 3.0 (https://creativecommons.org/licenses/by-sa/3.0)], via Wikimedia Commons

Our Lady of the Rosary leads us, through her intercession, to the contemplation of Christ and immersion into the sublime beauty of his love.

Pope St. John Paul II tells us in his apostolic letter, Rosarium Virginis Mariae, that the holy Rosary of the Virgin Mary gradually took “form in the second millennium under the guidance of the Spirit of God.” The Rosary, he writes:

[I]s a prayer loved by countless saints and encouraged by the Magisterium. Simple yet profound, it still remains, at the dawn of this third millennium, a prayer of great significance, destined to bring forth a harvest of holiness.…. The Rosary, though clearly Marian in character, is at heart a Christocentric prayer. In the sobriety of its elements, it has all the depth of the Gospel message in its entirety, of which it can be said to be a compendium. It is an echo of the prayer of Mary, her perennial Magnificat for the work of the redemptive Incarnation which began in her virginal womb. With the Rosary, the Christian people sits at the school of Mary and is led to contemplate the beauty on the face of Christ and to experience the depths of his love. Through the Rosary the faithful receive abundant grace, as though from the very hands of the Mother of the Redeemer. (RVM 1)

St. John Paul II noted that there exists a “certain crisis of the Rosary” in which it is inappropriately devalued (RVM 4). As part of this crisis, the Rosary is often not taught to young Catholics; some people see it as conflicting with the liturgy of the Church; others think that, because of its Marian character, the Rosary is a hindrance to ecumenical efforts. These attitudes are unfortunate and incorrect, noted John Paul II, pointing out that prayer does not detract from the liturgy but rather sustains it. Praying the Rosary strengthens one’s faith and draws one into a deeper relationship of intimacy with Jesus Christ. As such, the Rosary’s Christological emphasis is an aid to ecumenism (Ibid). He therefore recommends its revitalization.

St. Louis De Montfort had strong words for those who condemn the praying of the Rosary:

Even though God has set his seal of approval on the holy Rosary by many miracles, and in spite of the Papal Bulls that have been written approving it, there are only too many people who are against the holy Rosary today. These freethinkers and those who scorn religion either condemn the Rosary or they turn others away from it…. It is easy to see they have absorbed the poison of hell and that they are inspired by the devil – for nobody can condemn devotion to the holy Rosary without condemning all that is most holy in the Catholic Faith, such as the Lord’s Prayer, the Angelic Salutation and the mysteries of the life, death and glory of Jesus Christ and of his holy Mother” (St. Louis De Montfort, The Secret of the Rosary, 29).

God himself willed the Rosary as a gift to the faithful People of God. Through this gift, Our Lady handed to us a weapon against evil and an exceptional treasure of which the faithful should diligently avail themselves as a “genuine training in holiness”(RVM 5). Of great importance is the fact that the Rosary fosters among the faithful a “commitment to the contemplation of the Christian mystery” (Ibid).

Ultimately, the Rosary is a sublime gift of love which draws us, through prayer and meditation on the divine mysteries of the life of Christ, into Love Itself: the bliss of eternal communion with the Tripersonal God.

Reciting the teaching of Blessed Alan de la Roche, St. Louis de Montfort lists in The Secret of the Rosary (86) some of the blessings obtained by praying the Rosary:

Praying the Rosary is a path to the contemplation of the divine face of Christ, a wondrous journey that God has predestined for all since his will is the salvation of all by adoption in his Son, the Redeemer of Humankind (cf. 1 Tim 2:4-5). By entering into the Christian school of prayer directed by Mary and promoted by the gift of the Rosary, every Christian is enabled to better know Jesus Christ, the only Son of the sweet Virgin Mother of God. For it is Mary’s desire to lead everyone to her Child, just as she pointed those humble shepherds long ago to the manger where he lay (Lk 1:16) in order to allow their gaze to fall upon his divine face and foster the opening of their hearts to receive the new life he offers.

I want people who have a devotion to my Rosary to have my Son’s grace and blessing during their lifetime and at their death, and after their death I want them to be freed from all slavery so that they will be like kings wearing crowns and with sceptres in their hands and enjoying eternal glory—words of the Virgin Mary spoken to Blessed Alan de la Roche (qtd. in The Secret of the Rosary, 86).