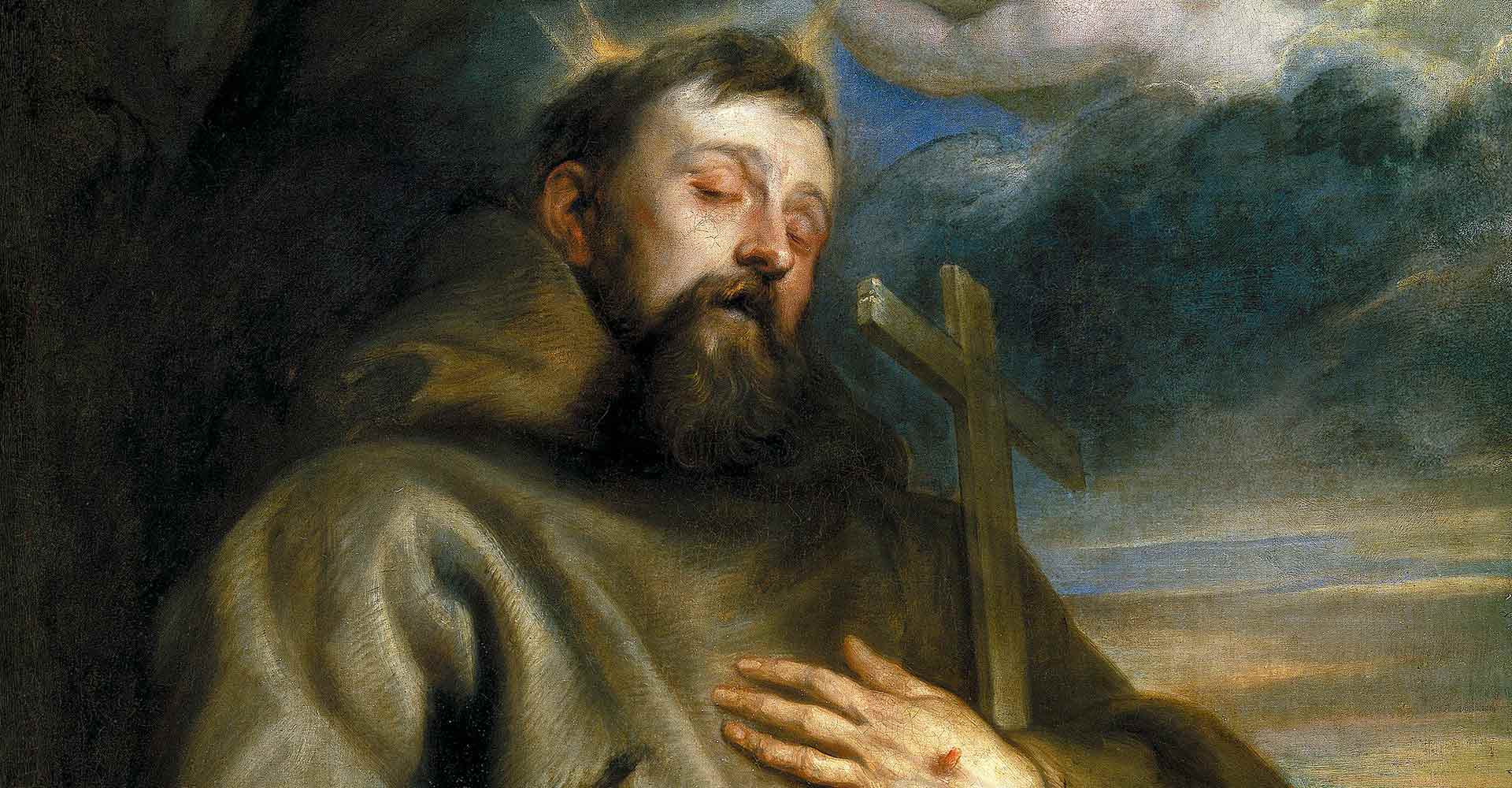 By his life, St. Francis displayed a love for God above all things.

As Jesus and his disciples were proceeding on their journey, someone said to him, “I will follow you wherever you go.” Jesus answered him, “Foxes have dens and birds of the sky have nests, but the Son of Man has nowhere to rest his head.” And to another he said, “Follow me.” But he replied, “Lord, let me go first and bury my father.” But he answered him, “Let the dead bury their dead. But you, go and proclaim the Kingdom of God.” And another said, “I will follow you, Lord, but first let me say farewell to my family at home.” Jesus answered him, “No one who sets a hand to the plow and looks to what was left behind is fit for the Kingdom of God.”

St. Francis of Assisi, the founder of the Franciscan Order, is perhaps best remembered for the life of sanctity, simplicity, and poverty he deliberately chose as a young man in strong opposition to the wealthy, pampered circumstances in which he was raised. Born at Assisi in Umbria (1181 or 1182) where he died 45 years later, his father was a wealthy cloth merchant and his mother is thought to have been of a noble heritage. According to what is known of Francis’ life as a youth, it seems his well-to-do parents often indulged his whims, contributing to his later love for worldly pleasure and approbation.

No one loved pleasure more than Francis; he had a ready wit, sang merrily, delighted in fine clothes and showy display. Handsome, gay, gallant, and courteous, he soon became the prime favourite among the young nobles of Assisi, the foremost in every feat of arms, the leader of the civil revels, the very king of frolic. But even at this time Francis showed an instinctive sympathy with the poor, and though he spent money lavishly, it still flowed in such channels as to attest a princely magnanimity of spirit.

When he was about twenty years old, Francis was captured by the Perugians and held as their prisoner for over a year. This traumatic event proved a decisive turning point in his life. He began to think frequently about heavenly, eternal things, and thus experienced a transformation in character. Later, when he gathered again with his old comrades, they noticed he was different, no longer interested in frivolous pursuits. The old Francis had gone, replaced by a new man whose heart was directed by a new love. 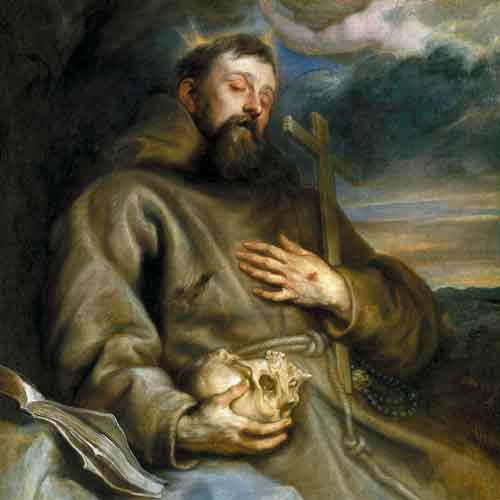 We’re perhaps familiar with the voice Francis heard giving this instruction while he prayed before a crucifix: “Go, Francis, and repair my house, which as you see is falling into ruin.” Impulsively, Francis gathered a large bundle of his father’s expensive cloths and draperies and promptly sold them, along with the horse he happily rode to the market, in order to obtain money to restore St. Damian Church. These good intentions, however, brought nothing but pain to Francis. The priest at St. Damian’s refused to accept the gold Francis had procured; his father enraged by his theft, Francis found it necessary to hide in a cave for a month to escape his wrath. Later, when he stumbled back into town half-starved and was mocked as a madman by the townspeople, he found his father’s rage had not yet cooled. He was dragged home, beaten, tied and bound, and locked in a closet.

When he was later released by his mother, Francis was found to be all the more firm in his new convictions. His subsequent life, wedded to Lady Poverty and in love with Christ is filled with wonderful stories, such as his embracement of a leper or how he heard the gospel at Mass about how Christ’s disciples were to renounce all possessions and immediately acted upon it the moment he left the church, as if its words were spoken directly from God to him alone. As a result, he quickly stripped himself of all worldly goods and possessions and selected a coarse wool tunic, bound around the waist with a knotted rope, as his only garment.

Once converted, Francis looked in one direction only, toward Christ and the riches of his heavenly kingdom: “No one who sets a hand to the plow and looks to what was left behind is fit for the Kingdom of God.”

While we cannot all live the exact same life of poverty as did St. Francis, we are all called without exception to live a new kind of life. Not everyone can be a celibate religious, nor does God ask it of all. Some men are called to the sacrament of Orders as members of the clergy. Other members of the People of God are called to a different vocation: to the sacred life of holy matrimony that builds up the Church and the kingdom of God through the transmission and Christian education of new human life. Whatever our vocation, all are called as members of Christ to put their divinely given and diverse gifts at service to others:

For as in one body we have many members, and not all the members have the same function, so we, who are many, are one body in Christ, and individually we are members one of another. We have gifts that differ according to the grace given to us: prophecy, in proportion to faith; ministry, in ministering; the teacher, in teaching; the exhorter, in exhortation; the giver, in generosity; the leader, in diligence; the compassionate, in cheerfulness. (Rom 12:4-8)

Although our degree of poverty will often differ from that of St. Francis, we are all called to live a life of poverty in spirit: one of humility, holiness, and sanctity in which the saving power of the gospel directs our deeds, words, and aspirations. Every human person is called to love God above all else for his own sake, and to love his neighbor for the sake of love for God, that he may attain the treasure which God has in store for all. Each person is called to renounce love of things, and in its place to willingly give over his heart in ardent love for God.

Given today’s materialistic and consumeristic context in which creatures (created things) are often placed above God, a life lived according to gospel precepts, in truth and charity, is especially challenging to fully embrace. In order to do so, one must become counter-cultural, which is only possible through prayer, grace, and the gift of the Holy Spirit. This does not mean one exists outside the world and its cultures in isolation; rather, it means living in the world but not of the world. It is a way of living that, aided by God’s grace, heals, elevates and transforms society according to the will and love of God.

The life of St. Francis was, ultimately, directed by the love of God. Although heavenly light guided his vision and his steps, it did not mean everything was easy. He attracted some followers, raised the concerns of others, and to some extent alienated the members of his own family. He was often misunderstood, rejected and ridiculed. It was a life filled with challenge and joy, pain and warmth, uncertainty and consolation. However, in the midst of these changing struggles he was grounded in an unchanging Reality: in uniting himself to Christ in poverty, obedience and love, he won himself a place at the eternal banquet of heaven.

There’s a place for you at this same banquet, where you will be seated with Christ and share fellowship with St. Francis for all eternity. Whether you take part is up to you. Will you give of yourself, die to old ways and embrace what is new by living a life radically different from the pattern the world forcefully decrees? Will you live as a new person?

I appeal to you therefore, brothers and sisters, by the mercies of God, to present your bodies as a living sacrifice, holy and acceptable to God, which is your spiritual worship. Do not be conformed to this world, but be transformed by the renewing of your minds, so that you may discern what is the will of God—what is good and acceptable and perfect. (Rom 12:1-2)

When St. Francis heard the gospel, he sincerely thought Christ was speaking directly to him. And that was indeed the case. That has not changed. Not for you or anyone else.

Please help us with a donation.