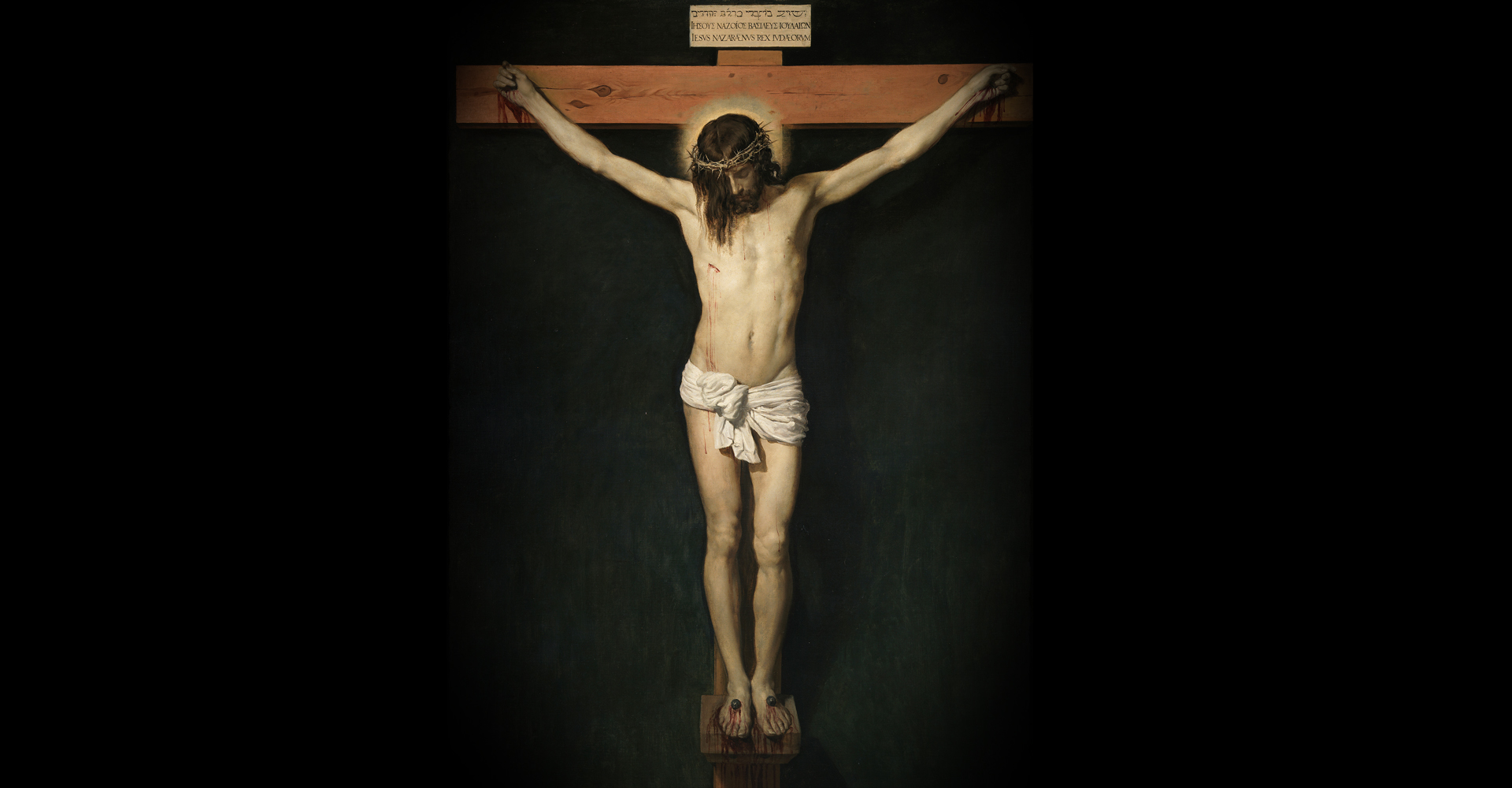 Temperature fluctuations during his imprisonment were severe: painfully cold winter months were soon followed by the stifling heat of summer. And, as if this were not enough, St. John of the Cross had to endure cruel floggings on the bare skin of his back—the scars of which he bore throughout the remainder of his life.

St. John of the Cross (Juan de Ypes) was born the youngest of three children in the small town of Fontiveros, Spain, around the year 1542. His father, a disinherited nobleman, Gonzalo de Ypes died when St. John was but an infant, leaving his mother, Catalina, to support the three children through her work as a weaver at the loom.

About six years later, the family moved to Arevalo, only to move again in three years to Medina del Campo in an attempt to escape conditions of grinding poverty. There, St. John entered a school for poor children, and soon showed a talent for nursing and hospital work. Graced with the abilities of quick learning, he studied Latin and rhetoric at a nearby Jesuit school.

St. John felt drawn to the contemplative life and thus entered the Carmelite monastery at age twenty-one. After excelling in his studies at the Carmelite College of St. Andrew and at the University of Salamanca, he was ordained in 1567, and was given his first assignment in which he was to act as tutor to the Carmelites of St. Anne Monastery in Medina del Campo. It was there, in 1568, that he met the mystic and Doctor of Prayer St. Teresa of Avila, who persuaded him to begin a reform movement among the Carmelite brothers which eventually resulted in bringing new vigor to the order.

However, things were soon to take an ill turn for St. John. Caught in a dispute between the Carmelites of the Mitigated Observance and the Carmelites of the Reform, he was accused of monastic disobedience and imprisoned in December of 1577 at the Monastery of Toledo. For the next nine months, he was locked in a six-by-ten-foot cell, with only meager light filtering in from a small slit high up on one wall.

The Way of The Cross

Temperature fluctuations during his imprisonment were severe: painfully cold winter months were soon followed by the stifling heat of summer. And, as if this were not enough, St. John had to endure cruel floggings on the bare skin of his back—the scars of which he bore throughout the remainder of his life.

It was there, in the seeming unending solitude of the dark cell, that St. John of the Cross composed wonderful poems and canticles which he committed to memory, since pen and paper were luxuries his captors withheld. These would later be used as a basis for his literary works, including his book, The Spiritual Canticle, which is influenced by the Song of Songs.

On reading his spiritual works there is little doubt that, in the empty silence of his captivity, St. John of the Cross was drawn upon the sublime heights of contemplation in the loving embrace of Christ. In The Dark Night, he writes:

[I] departed from my low manner of understanding, and my feeble way of loving, and my poor and limited method of finding satisfaction in God. . . . This was great happiness and sheer grace for me, because through the annihilation and calming of my faculties, passions, appetites, and affections, . . . I went out from my human operation and way of acting to God’s operation and way of acting. (John of the Cross, Selections from The Dark Night & Other Writings [HarperSanFransisco, 1987], 2).

St. John was no stranger to suffering. Through his intimate experience with loneliness, pain, and darkness, he was drawn all the nearer to the God of light and love, peace and consolation. For in union with Christ, the physical evil of suffering is transformed into something beyond itself, into something of wondrous good through the grace of God. After all, although the greatest evil imaginable is the crucifixion of the innocent Savior, that voluntary sacrifice on the cross of the sinless Christ resulted in the redemption of fallen humankind.

In fact, the importance of the cross in the life of the true Christian disciple became St. John’s maxim: “Do not seek Christ without the cross.” For St. John, innocent and voluntary suffering embraced in the way of the cross becomes an avenue to sublime intimacy with the Risen Lord. Therefore, suffering with the Savior is one key to the lofty heights of contemplation, which opens the door to the loving embrace of the Holy Spirit, transforming pain into unheard-of joy. While such a concept is quite foreign to contemporary society, it is entirely compatible with the Gospel:

For instance, Mark’s gospel is written to a Christian community suffering persecution. One could say that Mark is encouraging his contemporaries to endure the cross, since true Christian discipleship consists in both recognizing through faith that Jesus is the Son of God—the Messiah—and then following him in loving freedom along the way of the cross. We are to make Christ’s story our story; our Savior’s life our life.

“If any man would come after me, let him deny himself and take up his cross and follow me. For whoever would save his life will lose it; and whoever loses his life for my sake and the gospel’s will save it” (Mk 8:34-35).

But even Jesus’ disciples failed to grasp the full meaning of these words. Thus in Mark’s gospel, only after Jesus draws his last breath on the cross does his full identity breakthrough when the centurion cries: “Truly this man was the Son of God!” (15:39). Through the cross, the true meaning of Christian discipleship is illuminated.

Our Destiny Lies in Making Christ’s Story Our Story

St. Paul, also, was intimately familiar with the sublime theology of the cross: “I have been crucified with Christ; it is no longer I who live, but Christ who lives in me; and the life I now live in the flesh I live by faith in the Son of God, who loved me and gave himself for me” (Gal. 2:20).

St. John of the Cross lived by the words we find in John’s gospel: “Truly, truly, I say to you, unless a grain of wheat falls into the earth and dies, it remains alone; but if it dies, it bears much fruit. He who loves his life loses it, and he who hates his life in this world will keep it for eternal life. If anyone serves me, he must follow me; and where I am, there shall my servant be also; if any one serves me, the Father will honor him” (12:24-26).

The Catechism of the Catholic Church explains, “Apart from the cross there is no other ladder by which we may get to heaven” (No. 618). Recall that heaven is opened by the Paschal Mystery of Christ: his passion, death, resurrection and ascension. The cross “is the unique sacrifice of Christ.” Because “in his incarnate divine person he has in some way united himself to every man, the possibility of being made partners, in a way known to God, in the paschal mystery is offered to all men” (ibid.). Jesus calls his disciples to take up their cross and follow him. “In fact Jesus desires to associate with his redeeming sacrifice those who were to be its first beneficiaries. This is achieved supremely in the case of his mother, who was associated more intimately than any other person in the mystery of his redemptive suffering” (ibid.).

The Christian finds his or her life in appropriating the Paschal Mystery of Christ as their own. The baptized in Christ become fully human, achieve all that we are created to be and all for which we are destined in making Christ’s story our story. The fullness of human flourishing is found in God, yet the way to God is the cross. There is no other way, since it is by the cross of Christ that we are saved. Yet we need not fear this. For our Lord Jesus, who is kindness and love, compassion and peace supreme, calls us to the heavenly banquet through the contradiction of the cross. All we need do is trust and follow.

This Advent, a sacred season of preparation, let us ask St. John of the Cross to intercede for us in order that we may see what he saw, that we may understand the way to Love is through love of the way of the cross.