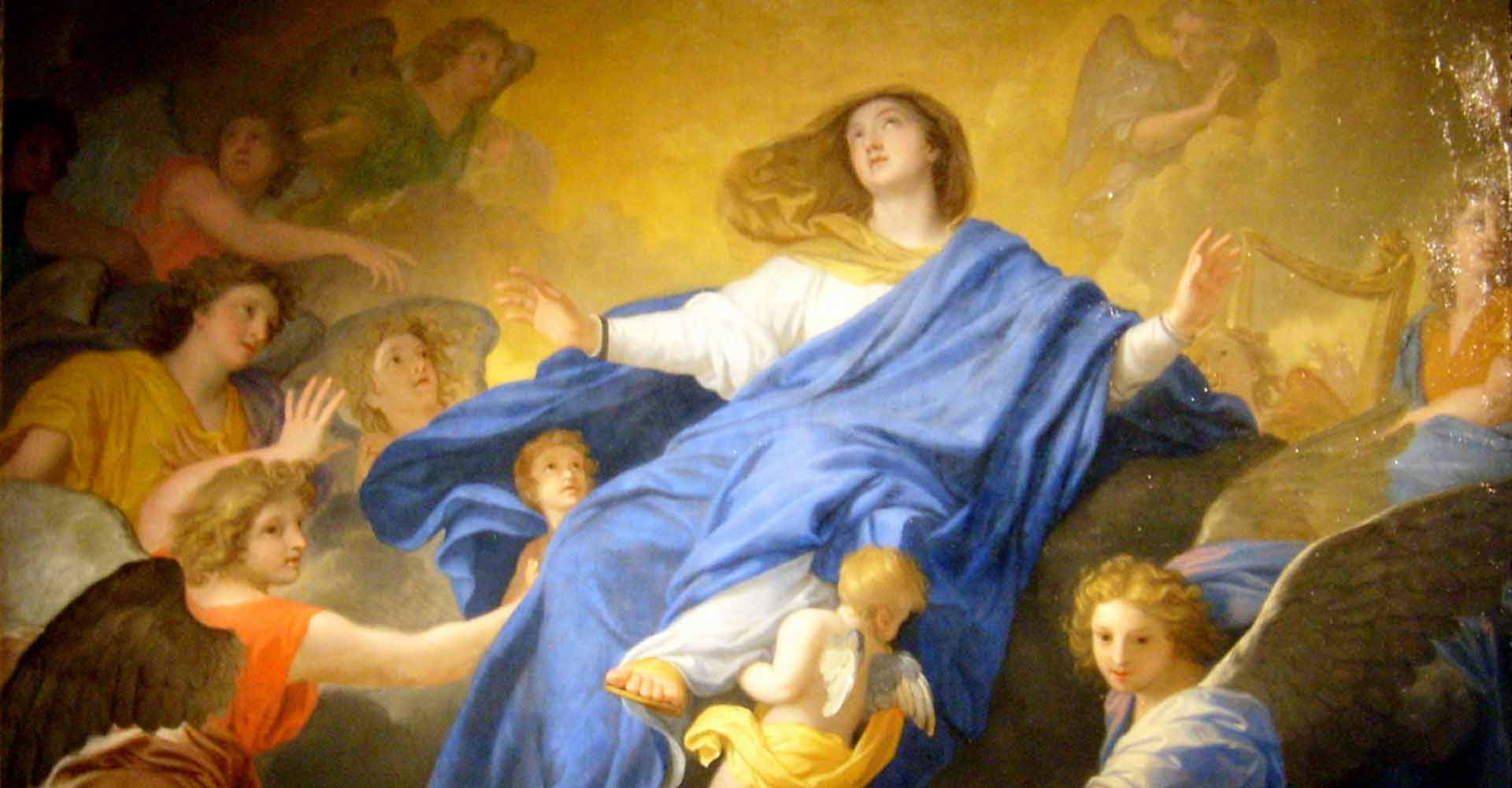 Did Pope Pius XII invent the dogma of the Assumption or, rather, did he define what God had already revealed to his Church and put into words what the Church had long held as part of her undying belief?

Non-Catholics and/or Protestants often accuse the popes and the Church of inventing unbiblical dogmas and doctrines. The Assumption of the Virgin Mary is one such dogma. Is it true that the Church invented this teaching or is it, on the other hand, found in the Tradition of the Church as an aspect of her life-consciousness, her prayer, and her belief? Was the Assumption something the first Christians believed? Additionally, what is the Assumption of Mary about and why is it important?

On 1 November 1950, Pope Pius XII issued the Apostolic Constitution Munificentissimus Deus, in which he proclaimed the dogma of the Assumption: “Mary, the immaculate perpetually Virgin Mother of God, after the completion of her earthly life, was assumed body and soul into the glory of heaven.”

First of all, did Pope Pius XII invent the dogma of the assumption? No. Neither the Church nor the popes invent dogma. A dogma is a matter of divine revelation received from Christ and deposited in the Church, which is then formally decreed by the Church to be a matter of divine revelation. It’s the Church saying, “God has said this through his Son.” It is usually the case that the Church defines dogma only after a particular element of her teaching and belief comes under attack. She does this in order to define, clarify and protect what is true against error. This aspect of protecting and clarifying what God has revealed is essential, given the fallen state of humankind and man’s propensity to muddle, dilute and obscure what is true. As a mother, the Church guards, cherishes and transmits God’s revealed word to her children in its full purity that they may know what is true, live by it, and attain salvation in Christ.

What the Church believes and teaches is part of her life-consciousness, her prayer, and her worship. Some of her belief (Sacred Tradition) received from Christ through the apostles is put down in writing in scripture. Therefore we could say that the Bible is oral Tradition written down. This means that both Tradition and Scripture are two modes of God’s singular self-communication to humankind. The Church does not invent dogma any more than she invents the teaching of Christ given to the apostles and deposited in her womb. Rather than invent, she defines what God has revealed in its fullness through his Son and proclaims this revelation to the nations as it is contained in the depositum fidei, the original deposit of faith which is guarded and cherished in the living community of the Church.

In other words, the belief in the Assumption is not new but old. It’s always been a part of the living Tradition of the Church and an integral aspect of her life-consciousness. To prove out this point, we can find evidence for it in the writings of the Church Fathers. Yes. The first Christians believed in the Assumption of Mary, as do Catholics today, as have Catholics believed all throughout the Church’s history:

St. Gregory of Tours wrote of the Assumption in about 590 A.D.: “The course of this life having been completed by the Blessed Mary, . . . [The Lord] commanded that [her holy body] be taken in a cloud into paradise.”

St. John Damascene wrote in the eighth century: The Word of God “was pleased even after [Mary’s] departure from life to honor her immaculate and undefiled body with incorruption and with translation [Assumption] prior to the common and universal resurrection.”

Some insist that the dogma of the Assumption is unbiblical. Again, this is due to a misunderstanding of the relationship between Tradition and Scripture, as well as a tendency toward strict biblicism (an unbiblical insistence that everything one believes or does with respect to worship and/or faith must be explicitly and literally spelled out in the Bible). While it’s true that the Bible doesn’t explicitly teach the Assumption of Mary, it’s also true that there are many other Christian practices and beliefs that are not explicitly taught in its pages. For instance, it does not mention the word “Trinity,” although all Christians hold to the belief that God is a plurality of three distinct, divine Persons who are all equally God by nature or essence. As another example, nowhere in early manuscripts of the N.T. are found the names of the authors of the gospels. The gospel of Matthew does not anywhere say it was written by him. A strict biblicism would have to deny all the authors of the gospels. We could no longer say, “The gospel according to Matthew.”

Scripture does not prohibit Mary’s Assumption. Although St. Paul teaches that the bodies of the just will be glorified at the general resurrection, Matthew 27:52-53 allows for an exception: After Jesus gave up his spirit on the cross, the “tombs were opened, and the bodies of many saints who had fallen asleep were raised. And coming forth from their tombs after his resurrection, they entered the holy city and appeared to many.”

But why is it important for Christians to understand and believe in the Assumption? First of all, since Mary’s bodily assumption into heaven is dogma, it is therefore a matter of Christian faith. Also, contemporary Christians ought to find great joy in embracing that same faith which their brethren held in the patristic era: the faith which is today transmitted in its entirety by the holy Catholic Church.

Second, the “Assumption of the Blessed Virgin is a singular participation in her Son’s Resurrection and an anticipation of the resurrection of other Christians” (CCC 966). The Assumption reminds us of our destiny in Christ. It points the way to our future by virtue of the faith we hold in Jesus, which unites us to him. Additionally, the Assumption helps to instill in us a proper desire to seek out the intercession of the Mother of God. “In giving birth you kept your virginity; in your Dormition you did not leave the world, O Mother of God, but were joined to the source of Life. You conceived the living God and, by your prayers, will deliver our souls from death” (Byzantine Liturgy, Feast of the Dormition).

The logical question is, if Christians today fail to accept that our Lord Jesus assumed his most precious and holy Mother into heaven, the sweet and sinless Virgin who gave birth to God in the flesh and raised him to manhood, do they truly believe that they themselves will one day be resurrected? In other words, if the Church got the Assumption all wrong, how can anyone be sure she got the general resurrection all right? Is the Assumption simply too fantastic to believe?

In then Cardinal Ratzinger’s book, God Is Near Us, he points out that, according to statistics, many Christians and churchgoers have given up on the belief in eternal life. There is, too, a difficulty in imagining that God is himself an active agent in history. Consequently, there is often a tendency to dismiss God’s ability to intervene in biological and physical processes (130 ff.).

How much more we find a great sea of doubt concerning the general resurrection. Is part of this problem related in some way to the carelessness which is often shown toward Theotokos, the God-bearer, who brought salvation into the world by giving birth to her Son, and who gave her entire being over to the Father in cooperation with the Holy Spirit?

The general resurrection is certainly a gift of God’s grace. But Mary has her essential role with respect to grace also. Mary is our mother in the order of grace since she cooperated in a wholly singular way with the Savior’s redemptive work through her unwavering obedience, faith, hope and burning charity (see CCC 968 ff.; Lumen Gentium 61). Mary walks the path of grace and life before us, and thus proceeds the journey of the Church toward eternal beatitude. Her “yes” to the loving plan of the Father opened before us the way to receiving grace through Christ, her Son. Mary’s “yes” brought salvation into the world.

This motherhood of Mary in the order of grace continues uninterruptedly from the consent which she loyally gave at the Annunciation and which she sustained without wavering beneath the cross, until the eternal fulfillment of all the elect. Taken up to heaven she did not lay aside this saving office but by her manifold intercession continues to bring us the gifts of eternal salvation. . . . Therefore the Blessed Virgin is invoked in the Church under the titles of Advocate, Helper, Benefactress, and Mediatrix. (CCC 969)

As we reflect on the Assumption of Mary, we are led into the deeply beautiful truths of God’s love for humankind. In the Virgin Mary, we have the exemplar of our purpose and destiny. Mary, the Mother of God and the Mother of the Church, leads us by her supreme example toward a life of true Christian discipleship. She has forged ahead the path of final beatitude; she beckons us; prays for us, and, as our sweet Virgin Mother, unceasingly guides us with delicate and beautiful hands toward that place where she herself resides: eternal, unending joy in the face-to-face vision of God.

What God has promised on the last day for those he loves, he has already accomplished in the Virgin Mary. Let us turn to Mary and love her as our spiritual Mother in the order of grace; let us open our hearts to her Immaculate Heart, that she may illuminate her Son all the more in our lives, guiding us toward orthodoxy and unity, and instilling through her intercession a lively and burning faith within our hearts.