We adore you, O Christ, and we bless you. By your holy cross, you have redeemed the world.

Today we celebrate the Feast of the Exaltation of the Holy Cross. People often ask, why do Catholics venerate the cross of Christ?

The simple answer is that, as the Catholic Encyclopedia tells us, the cross is a symbol closely associated with the saving passion and death of Christ. Our Lord Jesus Christ offered himself on the Roman cross in a sacrifice of perfect obedience of his human will to God the Father in order to atone for sin and effect the redemption of humankind—something no mere man could do. The cross is the instrument through which Jesus’ saving passion and death was completed, which gave way to his burial and subsequent resurrection to new life. The so often used and always feared means of heinous torture found in the ancient world has become, by the power of God’s saving and mysterious love, the instrument through which the incarnate Son of God brought about humankind’s greatest good.

As Catholics we preach Christ crucified; as his disciples, we must live by his cross in shouldering our own.

If any want to become my followers, let them deny themselves and take up their cross and follow me. For those who want to save their life will lose it, and those who lose their life for my sake will find it. For what will it profit them if they gain the whole world but forfeit their life? Or what will they give in return for their life? (Mt 16:24-26)

Today the full meaning of the cross and what it represents often escapes people who look upon it, unless they do so in a state of meditative prayer. Perhaps because it has become such a well-known symbol so frequently adorning the neck, it too has been made commonplace and ordinary, a simple decoration, the bloody brutality of crucifixion forgotten, overlooked, neatly sanitized of its abject horror. Consequently, there is great spiritual profit to be found in a brief study of the historical details of crucifixion—that most feared means of execution normally inflicted on criminals by the thousands in the Roman empire. 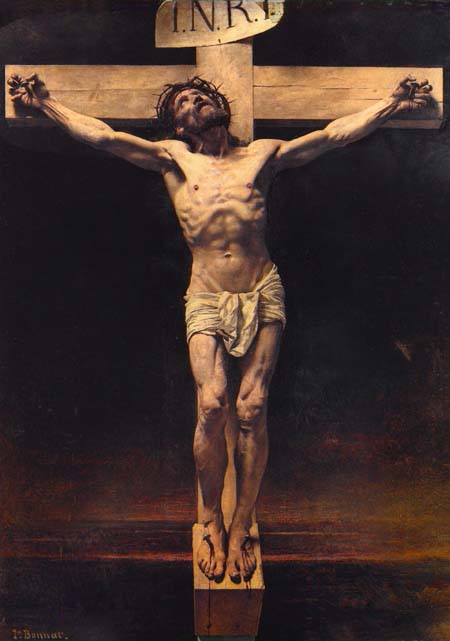 People often lament that Americans are desensitized to violence; after all, its images are in no short supply. We gaze upon the brutality of murder, war, exploding buildings, rape and other forms of human atrocities rather indifferently from the comfort of our living rooms while enjoying a favorite treat—all in the name of “entertainment.” Although we apparently often fail to grasp the true and evil nature of violence as we should, it seems this situation might have less to do with the fact that it is so often and readily viewed as it does with how it is viewed. The point is, although violence is everywhere a part of today’s world, it is often experienced artificially from an armchair as if it is something that happens only at a distance. The shocking reality of violence has been made into something comfortably unreal. In ancient times things were quite different. People were exposed to violence in the most naked, direct, and assaulting manner. This was the case even from childhood: little children walking by Golgotha in Jerusalem could hardly have averted their eyes from the dead who hung from crosses each day, tortured methodically and meticulously to the point of death by asphyxiation in the most brutal manner ever devised, serving as bloody signs of the absolute power of the Empire to all who passed by—as human images communicating but one unforgettable message: anyone who provokes the wrath of Rome will suffer the same fate.

An increase in knowledge about the reality of crucifixion in the ancient world, leads to an increase in appreciation for the suffering Jesus Christ endured innocently for our sake. By understanding its extreme violence, we too understand more of the unfathomable and singularly wondrous love of God for man, which leads to greater love for the Son of God who became incarnate and took the form of a slave in service to all, becoming “obedient to the point of death—even death on a cross” (Phil 2:8).

In Morning Prayer of the Liturgy of the Hours, we pray: “We adore you, O Christ, and we bless you. By your holy cross, you have redeemed the world.” St. John Chrysostom in his writing frequently alludes to the adoration of the cross:

The cross will remain forever as an astonishing sign of God’s extraordinary love for man.

All praise to you, Lord Jesus Christ, for the suffering you underwent on the Roman cross, an instrument of horrific torture, for the sake of the redemption of humankind and the love of God the Father. Your sacred blood, as you suffered in unimaginable agony, was loosed upon its wood, pouring forth from your many wounds, from the nails driven into your hands and feet, from the open gashes inflicted by the merciless scourging you received from head to heel. We praise you and bless you, O Lord, for by your cross you have put death to death and raised up a fallen world. Grant that we receive the grace to embrace the cross in our own lives, that we may truly become one with you as intentional disciples, bearing forth your most holy name.

Please help maintain this site with a donation. Even small tips help.