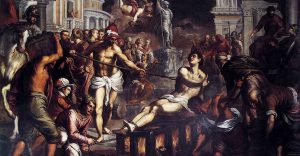 Today Catholics around the world celebrate the Feast of St. Lawrence, Deacon and Martyr, who fell victim to the Christian persecution of A.D. 258 under the Roman emperor Valerian. At the beginning of the month of August, the emperor issued a decree commanding that all members of the Catholic clergy be put to death.