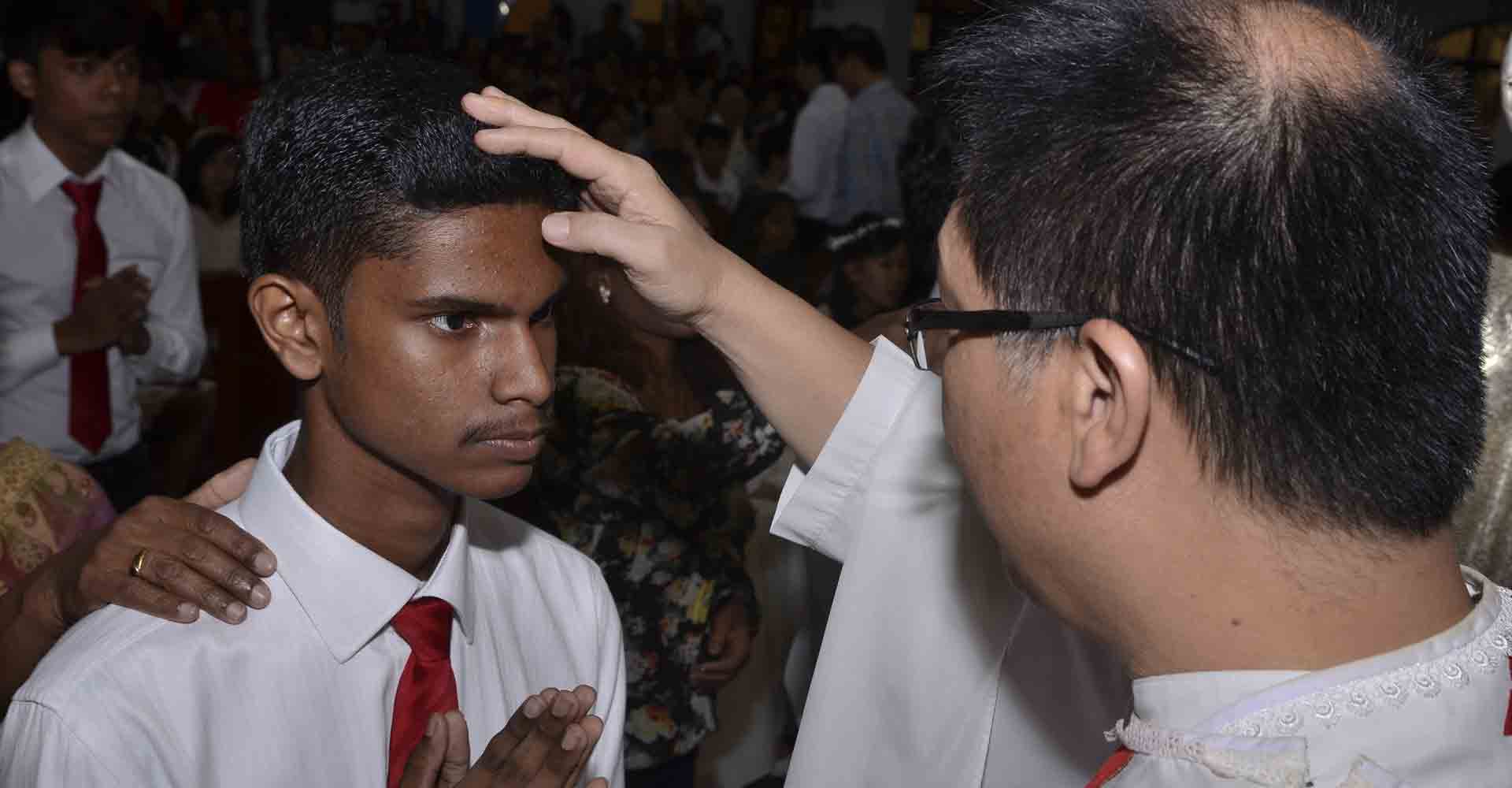 On February 11th, 2019, Bishop James S. Wall announced that the Roman Catholic Diocese of Gallup will be restoring the Sacraments of Initiation to their proper order: Baptism, Confirmation, Holy Communion. The Gallup Diocese is only the latest in a slow, but steady, movement.

There are even other dioceses that have been quietly discussing the possibility for the last few years as well. Even some catechetical curriculum companies, like Sophia Institute Press or the Brother Francis Confirmation Episode, are beginning to provide resources for Confirmation received at an earlier age, and I think that Gallup will surely not be the last diocese to take this action.

For a review of the correct understanding of Confirmation, please enjoy my article: Errors in Confirmation Catechesis Are Today Prevalent. You can also read my article on the Sacraments of Initiation and the Call to Evangelize.

Bishop Wall begins his letter with a summary of the connection between Baptism and Confirmation. Before stating his intention to restore the Sacraments of Initiation “to their original order”, he reviews the theology of the order in relation to the Eucharist: “At the same time, the Sacrament of Confirmation is ordered toward a deeper communion with the Lord and to His Church through this witness to Him, a communion which receives its greatest expression and grace in this life in the sacrament of Holy Communion.”

The letter provides a simple explanation of the historical realities that created the situation that most of us have grown up with. For the earliest centuries of the Church, the Sacraments of Initiation were most often received in their original order and in a single liturgical celebration. Around the fifth century, the Sacraments of Initiation remained in their order, but their reception was spaced out throughout a person’s life: Baptism often received early on, Confirmation around the age of seven, and Holy Communion was received later at about adolescence. During the reign of Saint Pope Pius X, children began receiving Holy Communion at the age of reason, roughly seven years of age, and this “had the unintended consequence of moving the Sacrament of Confirmation to an older age, thus inverting the original order of the Sacraments of Initiation.”

Bishop Wall highlights what he believes to be the pastoral concerns that he has witnessed as shepherd of his diocese.

The Diocese of Gallup will undergo a three year transition where the norm will then become Confirmation and Holy Communion received around the age of eight. For many of us that have discussed the restoration of the order of these sacraments, one of the questions that is asked of us is, “How will we keep them in classes?” This concern is hinted at within the letter. Bishop Wall remarks,

Perhaps the biggest challenge parishes will face with this change in policy will be the need to develop creative programs to accompany, form and integrate young members of the parish – now fully initiated – into the life of the Church.  Therefore, our catechetical program after the 3rd grade will no longer be tied to the reception of a sacrament, which will offer the diocese and parishes the possibility of developing resources, programs and activities that will help our young Catholics grow in their faith, discern their vocation and prepare for that Christian vocation as they approach adulthood.  The diocese welcomes the possibility of discerning new experiences and best practices that the parish communities develop to share with the rest of the diocese.

It will not be easy for the Gallup Diocese, or any diocese, to develop programs that will be (1) Faithful to the Church, (2) succeed in further evangelization and catechesis, and (3) appeal to parents and children for their continued involvement. It is a challenge but one that has the potential to remove the falsehood that sacraments are the goal of classes, rather than sacraments are the beginning of something new and faith formation is a life-long process. Let us all keep the Gallup Diocese in our prayers as they embark on this transition and journey.

Here are some closing thoughts by Benedict XVI,

In this regard, attention needs to be paid to the order of the sacraments of initiation. Different traditions exist within the Church. There is a clear variation between, on the one hand, the ecclesial customs of the East and the practice of the West regarding the initiation of adults, and, on the other hand, the procedure adopted for children.  Yet these variations are not properly of the dogmatic order, but are pastoral in character. Concretely, it needs to be seen which practice better enables the faithful to put the sacrament of the Eucharist at the centre, as the goal of the whole process of initiation. In close collaboration with the competent offices of the Roman Curia, Bishops’ Conferences should examine the effectiveness of current approaches to Christian initiation, so that the faithful can be helped both to mature through the formation received in our communities and to give their lives an authentically eucharistic direction, so that they can offer a reason for the hope within them in a way suited to our times (cf. 1 Pet 3:15). -Sacrament of Charity 18

Brandon Harvey is married and blessed with four children. He studied undergraduate theology and philosophy at Briar Cliff University and received an MA in Theology from Franciscan University. He works as a Catholic speaker, theological consultant, and writer. He has developed the Home Catechesis Podcast and Vlog resource: www.homecatechesis.com