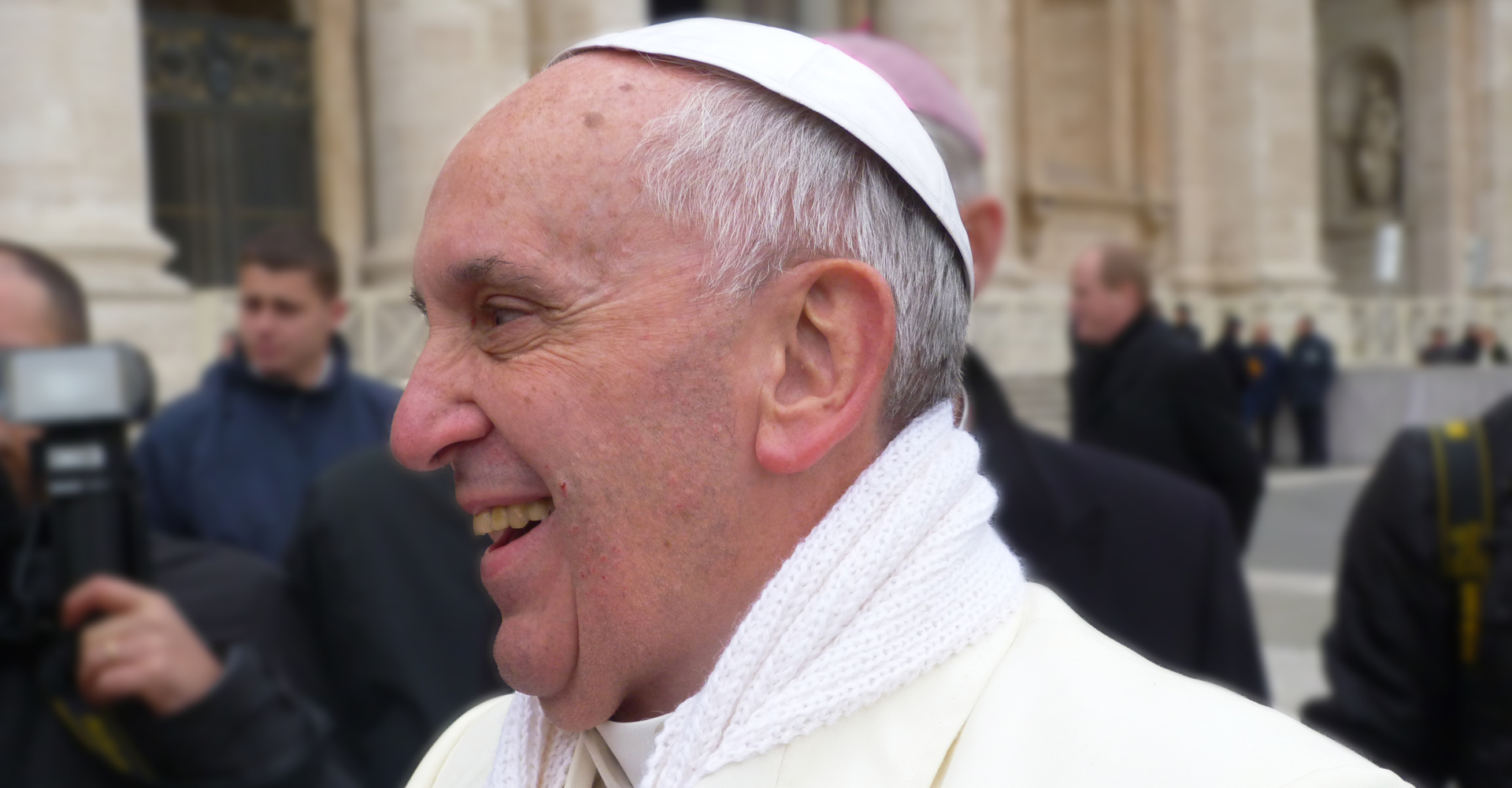 The election of Pope Francis reminds the world of the solidity and permanency of the Catholic Church founded by Jesus Christ, who is himself the unchanging light of humanity (Heb. 13:8; Jn 1:4).

When the Cardinal proto-deacon Jean-Louis Tauran stepped onto the balcony of Saint Peter’s Basilica on March 13, and proclaimed Habemus Papam! “We have a Pope!” the permanent and changeless nature of the Church of Jesus Christ was once again boldly and beautifully presented to the world. With those words, which in fact echo back to a divinely ordained and instituted event twenty centuries ago, Christians of all nations and every state of life are reminded once again that “Jesus Christ is the same yesterday and today and for ever” (Hebrews 13:8). At present, Pope Francis stands as a visible sign of that permanency.

While our Lord and Savior Jesus Christ did not exclaim Habemus Papam! in the early first century A.D., he nevertheless installed St. Peter as earthly head of the Church and leader of the apostles, giving to him the keys to the kingdom and the powers to bind and loose (see Mt. 16:17-19). In doing so, the Son of God set into motion his plan to form an organic, divine and human institution of a hierarchical structure whose purpose would be as an instrument of the will of the Father in bringing salvation to humankind. This plan, in fact, was born from eternity in the heart of the Father, whose superabundant love unceasingly calls humankind to himself.

The divine institution of the Church was completed by Christ’s sacrificial death on the cross, when, giving of himself completely, he poured forth his sacred blood and spoke the last word: “It is finished” (Jn 19:30). From the side of the crucified Christ came the “wondrous sacrament of the whole Church” (Sacrosanctum Concilium 5).

After Jesus was resurrected, the eleven disciples went to the mountain in Galilee, where Jesus appeared to them and said, “All authority in heaven and on earth has been given to me. Go therefore and make disciples of all nations, baptizing them in the name of the Father and of the Son and of the Holy Spirit, teaching them to observe all that I have commanded you; and lo, I am with you always, to the close of the age” (Mt. 28:18-20). While this happened long ago, it continues into the present. The Catholic Church has been continually fulfilling that commandment through the guidance of the Holy Spirit for twenty centuries; all the while under the earthly direction of the Vicar of Christ.

That the election of a pope is nothing new is clear. Nevertheless, it is interesting how an important event in the life of the Church, such as the election of Pope Francis, commands the world’s attention—albeit temporarily. For hours or days, the world turns its curious gaze on the Church; it wonders about what it views as the mysterious inner workings of the institutional Church; it ponders what happens behind closed doors and what, if anything, it all means in the grand scheme of things when the white smoke rises. Perhaps the world’s fickle curiosity is momentarily captured by the “newness” of the event; because it is but one more “story” to be promulgated by the media and fed to the “informational vacuum” of the modern world. But there is more to it than that. Why does the world look to the Church? The simple answer is that in a real way the Church is Jesus Christ, who is himself the light of humanity (Jn 1:4). The world cannot long remain completely disinterested in such a reality, even if it fails to grasp it.

The fact is, the Church means not merely something but everything to the world because she is the Father’s plan for humanity. “The Church does not only communicate divine life to man but in some way casts the reflected light of that life over the entire earth, most of all by its healing and elevating impact on the dignity of the person” (Gaudium et Spes 40). The Church is not merely a human institution, but rather a total and unique divine and human community, with a singularly indispensable and unparalleled contribution to make.

Mother Church has but “a single intention: that God’s kingdom may come, and that the salvation of the whole human race may come to pass” (GS 45). This intention is God’s intention; it is the Father’s salvific plan for his children for which his only Son died; it speaks to the destiny of humanity. Who would not be interested in the Church? Further, who would not want to enter fully and completely into this wondrous, holy community destined for eternal and blessed communion with God?

The 265th successor of St. Peter, Pope Francis, a pope of simplicity and humility, continues, as so many who have gone before him, to beckon humankind into the womb of the Church. Today, the day of salvation (2 Cor 6:2), he steers the Bride of Christ into the future as he invites humanity itself to embrace the promise of divine life by becoming one with Christ in the arms of mother Church. In doing so, our new Holy Father calls us to live out the life of the Church and become instruments of the glory of Jesus Christ, something which is made possible through a confession of faith in Jesus Christ, Savior of the world:

The First Letter of St. John reminds us that anyone who claims to follow Jesus yet denies he is the Christ is a liar and the antichrist (2:22). If we desire the eternal life offered by the Father through his Son, we must confess Jesus the Christ.

The words in the first homily of our Holy Father also remind us of the words of St. Peter himself. Jesus had asked his disciples: “But who do you say that I am?” (Mt 16:15). Peter responded: “You are the Christ, the Son of the living God” (v. 16). In making this confession, Peter is called “blessed” (v. 17). In speaking about confessing Jesus Christ, Pope Francis, while yet a new pope, becomes ancient as he is linked to the chief shepherd of the apostles and the Church of two-thousand years hence.

To confess Christ is to give oneself entirely over to the Person of Jesus Christ, to believe all that he has said and done, entering fully into the mystery of his life. In doing so, we become one with him; by the gift of faith and in virtue of the sacrament of Baptism, we become members of his one body, the Church. That in itself is the meaning of being Catholic: to be totally united with Jesus Christ now and forever.

“I would like for us all,” continued the Holy Father, “after these days of grace, to have courage, precisely the courage to walk in the Lord’s presence, with the cross of the Lord; to build the Church upon the blood of the Lord, which was poured out on the cross; and to confess the only glory there is: Christ crucified. And in this way the Church will go forward.”

Yes. It is in Christ crucified that the community of the Church draws her life breath. She will go forward because Christ poured out his blood for her, giving her life, and promised to be with her always (Mt 28:19-20); she will continue with permanency because God’s kingdom shall forever stand (Dan 2:44); she bears the marks of unity and solidity because the Holy Spirit is her soul, whose unceasing guidance bonds her as a community in the fullness of truth (Jn 14:16, 26; 16:13); and she will walk forward because the flock of Christ has, once again as with St. Peter, been given a chief shepherd (Jn 21:17): The Vicar of Christ, Pope Francis. Habemus Papam! “We have a Pope!”

The Church will go forward as she always has, unwaveringly and unceasingly proclaiming Christ crucified with constancy and permanency. Whole civilizations have appeared and vanished, wars have begun and ended, but the Church remains, moving ahead along a timeline that stretches not simply into the future but into an eternity filled with the indescribable glory of unending, blessed communion with God. Our Holy Father, Pope Francis, is a sign of the singular continuity, unity, solidity, and permanency that can nowhere else be found, for the Church is not “something,” but Someone who “is the same yesterday and today and for ever” (Hebrews 13:8).

Please consider helping to spread the message of the Catholic Church.